Recent history has shown Las Vegas to be on the leading edge of the housing market, with both positive and negative implications.

In the mid-2000s, the region was the envy of the nation as its robust construction labor force churned out new homes, condos and apartment units at a rapid pace. Average sale prices for existing homes in Nevada in 2007 topped out at well over $300,000; new homes were going for nearly $400,000.

Then, after the housing market crashed, Las Vegas was on the other end of the spectrum, feeling the burn of the Great Recession. Existing home sale prices in Nevada plummeted to less than $150,000 by 2012. New homes were going for just over $200,000.

Foreclosure rates also went skyward, as 18.5 percent of mortgages were delinquent by more than 90 days.

Currently, things are largely stable in Nevada and Las Vegas. And while that’s a good thing, effects of the Recession still linger. The Korte Company has found creative solutions in ongoing projects that are helping revitalize a city that had been the poster child of recent economic problems.

The facility, named The Degree, will contain 226 units and be home to more than 750 students.

The structure is shaped similar to a figure ‘8’ with an interior courtyard on one end and a 456-space parking garage on the other. A pool, spa, cyber café, fitness room and communal areas are also amenities included as part of the scope of work.

The building layout presented some interesting challenges for the team. During the construction phases, access was required to complete construction of the interior sections, including the courtyard areas. Because these sections were centrally located, they were essentially landlocked by the apartment units, which lined the exterior parameter of the facility. Along with the interior sections, both the North and East sides of the project required access that was not currently available. 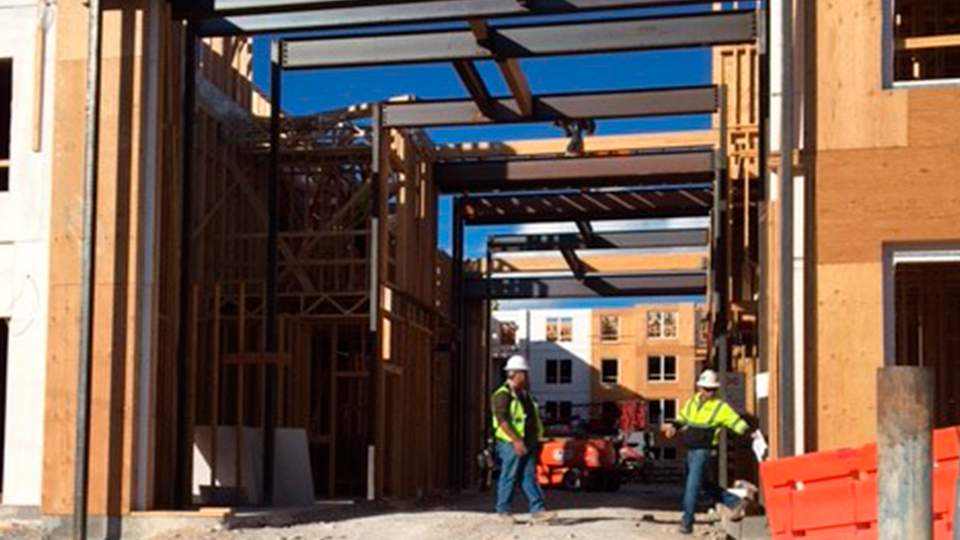 With limited access to the site and existing overhead power lines on the North side of the property, the only viable solution was to engineer a tunnel through the building for materials and manpower to access the courtyard and North and East sides of the building.  Project Managers from The Korte Company first visited a site in California that resolved a similar challenge through the use of a tunnel that was incorporated into the design of the building.

Shortly after the site visit, a tunnel was engineered and constructed on The Degree site, which provided access for workers, vehicles and materials to the Courtyard, North and East sides of the project.

The confined space around the site offered little room to maneuver vehicles and equipment. In order to maximize efficiency, The Korte Company created additional space by prioritizing the pouring of the garage decks and floors to allow for additional parking and access to the site.

The biggest challenge The Korte Company has encountered with The Degree project has been keeping framers on the job.

When the recession struck and construction work dried up, the region’s corps of framers left town with the rest of the construction work force in search of better opportunities. They didn’t all come back. The resulting shortage of framers relative to the volume of new construction continues to be a challenge throughout Las Vegas.

With framers in short supply, Project Managers from The Korte Company have kept the project on schedule by incentivizing them to remain on their projects in the form of a safety bonus program. As part of the program, site superintendents distributed gift cards to framers who practiced safe work methods and fostered a safe work environment.

The Korte Company is busy on another project nearby—the construction of a five-story mixed-use building at Fremont and 9th streets near a resurging entertainment district. That part of the city isn’t far from the original plat of Las Vegas and brings with it the familiar challenges of working in city centers—namely, there isn’t much space to work and there are utilities of all kinds and from all eras in the way.

The first problem workers had to contend with was the site itself, as the footprint of the planned structure butts up almost to the property lines. Crews have rented space in an adjacent parking lot in order to store equipment and supplies.

Then, during excavation, asbestos-containing components of a water monitoring system left over from a gas station that had formerly occupied the property were found underground. The material was properly abated. 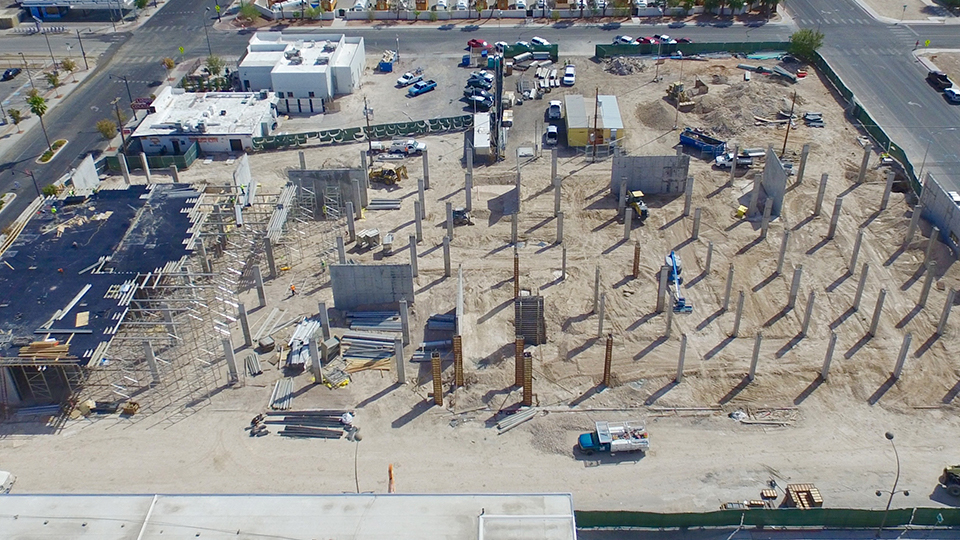 Another challenge—perhaps the biggest one of the project—is a narrow alley that runs between 9th and 10th streets. Designs called for 28 conduits to be placed in a trench dug into that alley. But the alley is too narrow for traditional trench digging implements to fit. Instead, workers used a backhoe with an attached trenching tool to cut into the ground.

Getting the trench to the right depth proved to be a challenge, too. Just below the topsoil, a layer of hard rock slowed progress. The shape of the trench at its ends also was modified because existing underground utilities were too close to the work area.

As work in that trench progressed, workers found water and gas lines—some of them in use, some of them abandoned—all in close proximity to one another. New utility services were to join the existing infrastructure in the trench, which required coordination among the many providers and the construction crews to stay on schedule and out of each other’s way.

While managing those difficulties, crews also are taking care not to disrupt the goings on at neighboring businesses.

These ongoing projects in Las Vegas show there’s new life in a city once hit hard by economic troubles. The Korte Company is honored to play a role in the resurgence of a stronger, more stable downtown core of Las Vegas. There are challenges, but here at The Korte Company, challenge is just another word for opportunity.

The current phase of The Degree’s construction will be complete in time for the beginning of the 2017 UNLV school year. The Fremont Street project is expected to be finished this year.

Contact us to learn more about how The Korte Company innovates in the face of adversity or read case studies to see how we’ve completed other projects across the country.