Nancy Tebbe has known about The Korte Company for as long as she can remember.

That’s not surprising given her lineage.

“My dad was a Korte. He grew up on a small farm outside of Highland, just like Ralph Korte did. Dad and Ralph, as well as their siblings, are about the same age. I’ve always known them.”

As a kid, it seemed like every time a new business went up in Highland, Ralph was building it.

In her early 20s, Tom Korte hired her as his personal secretary. Three decades later, she wouldn’t just know what The Korte Company had built — but how we did it. Nancy’s too humble to ask for credit, but her work ethic and attention to detail make her irreplaceable. 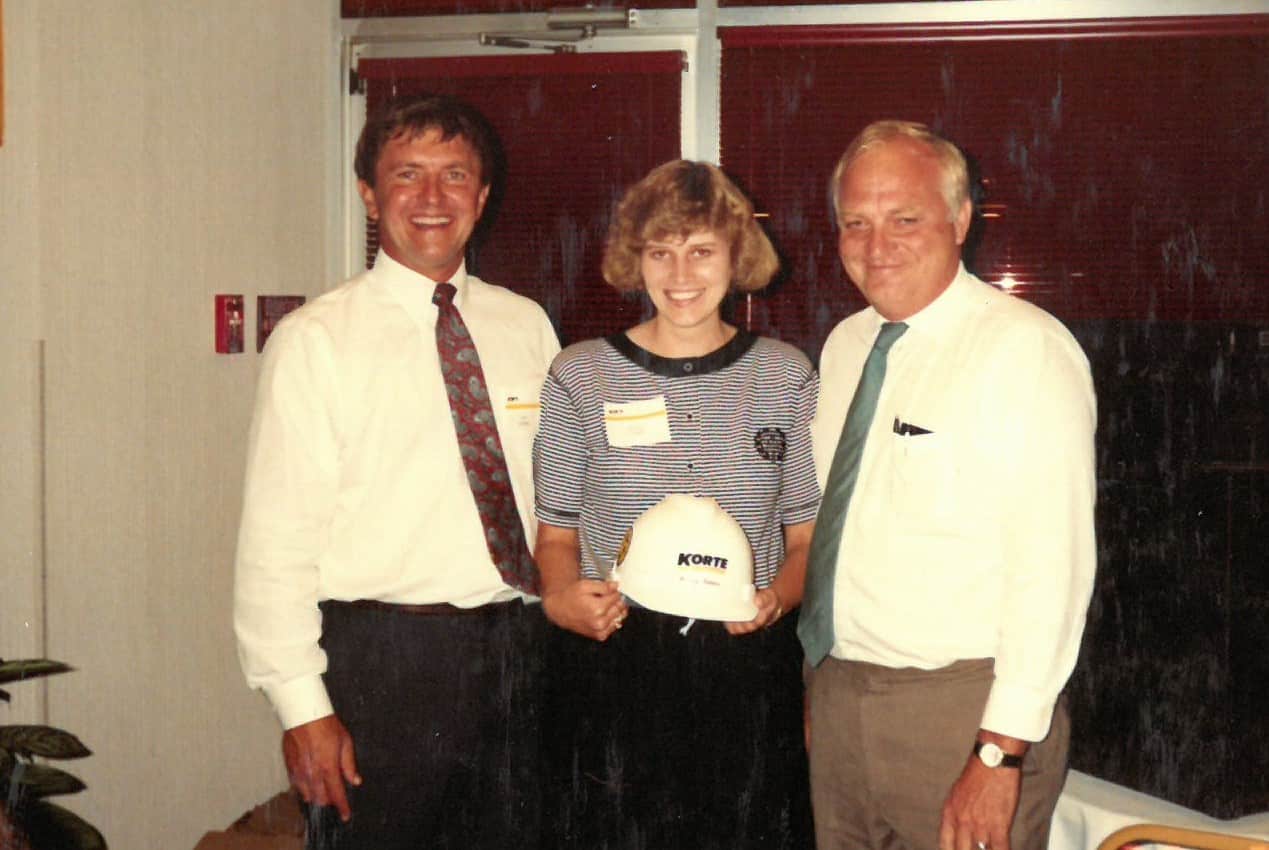 Today, Nancy jokes that when someone new joins The Korte Company, the first thing they’re told is to give her a call.

“I just get calls for anything and everything. Since I’ve been here for so long, I can answer most of their questions. And if I don’t know the answer, I know the person they should be talking to.”

That’s three decades of her encyclopedic memory in action.

But it wasn’t always that way. In 1988, Nancy was a newlywed and a fresh graduate of the Hickey Business School. She was working as an administrative assistant at a bank in downtown St. Louis. When that branch moved to Clayton, she looked for a job closer to home.

Her brother worked for Ralph Korte Realty and got her a secretarial interview. She met with Gerry Staley on a Saturday morning. A week later, she got a polite ‘no, thank you’ letter in the mail.

It didn’t faze her.

But then two weeks later, Tom Korte hired her as his own personal secretary.

“My dad was really happy when I got the job, that I was going to work for Ralph’s company because he always admired Ralph.”

At the time, The Korte Company had just converted its warehouse into offices. The carpet glue wasn’t even dry yet, and the walls still smelled like fresh paint. And that first day on the job?

But in a good way. Tom never had a full-time secretary before, so they were both driving blind. But Nancy took new responsibilities in stride. She also assisted the safety director and quickly learned a lot about workers’ compensation rules and OSHA recordkeeping.

“That whole week was just so much fun. They had a huge party with all the employees to dedicate the new high-tech conference room. I remember the IT department put together clips from Top Gun, so all this Top Gun stuff was shown on huge movie screens. Everyone was so friendly.  I immediately thought, ‘This is where I want to be.’”

That was just the start of all the good times to come. Tom quickly proved himself a mentor to Nancy.

“I remember telling my husband, ‘When Tom Korte talks, you can practically see the gears turning in his head.’ He just had that can-do attitude. And he just really took me under his wing. He taught me a lot about work and life in general.”

Since all the jobs were local at that time, superintendents stopped by every day. And she quickly got to know everyone and became known as the one with all the answers. It was fun to hear job site stories from the field and learn what they deal with on a daily basis.

Only Nancy could make it look easy.

Nancy was hired as an administrative assistant, but her responsibilities quickly grew.

“I support every job site team in every location around the country. I can’t say that I’ve had a huge part in making each job a success, but hopefully, I helped that superintendent say, ‘This is my most successful project.’”

At The Korte Company, no one rivals Nancy’s organizational feats. From reciting accounting regulations or helping employees with relocation logistics, Nancy seems to figure it out. And she doesn’t have a secret system or thick reference binder. Just a daily to-do list.

“I have a notepad. I put arrows by something that needs to be done and I cross things off as I get them done.”

She makes it sound so easy.

“You just never know what’s going to pop up. You don’t get bored here. I get text messages around the clock from different people in different job sites in different time zones.”

When a job starts, she helps provide the employment posters, signage, equipment and miscellaneous items needed for the office trailers. For government jobs, she prepares the Accident Prevention and Quality Control Plans to submit for approval prior to the start of work. She also ensures the field management staff have the required training up to date per OSHA and EM 385 standards.

She even coordinates all the travel. That’s her favorite task.

“They have enough to worry about, so I hope to take the stress of travel plans off their plate.”

And then there are always invoices to approve, expense reports to review, questions to field. It’s all about the details.

But her most memorable challenge was coordinating The Korte Company’s first Hawaii job, the Kilauea military camp renovation.

She had to help move superintendents, engineers and support staff from the mainland to the Big Island. And that included transporting their household items and finding year-long truck rentals. She’s even shipped Oreos to a homesick superintendent working in Hawaii, because he said they were too expensive to purchase there.

At that time, Tom was also overseeing the Korte Interiors department, which had the contract to furnish all of the furniture for the project. “It really made me think outside the box. Just working through the logistics and cost of shipping all these containers of furnishings over there, it was just a challenging learning experience.” With the five-hour time difference, most phone calls happened in the late afternoon and evening.

As The Korte Company’s footprint expanded its presence into Puerto Rico and Alaska, she developed a new ritual. Every night before bed, she began checking her email to see if any employee needs anything. And she checks that email again first thing in the morning.

No two days are ever alike, but Nancy takes it all in without hesitating.

That’s because for Nancy, The Job is The Boss.

Nancy in the community

The longer Nancy worked for Tom, the more he helped her network with key professional and philanthropy organizations in town.

In 2001, Tom was a member of the steering committee that developed the standardized drug testing consortium with the unions. She attended every meeting with him and got to know several union representatives.

“Tom was a member of the Lions Club, Highland Country Club Board and the Highland Manufacturers Association, so I helped him support these organizations and met many other members in the community.”

That passion for getting involved in the community didn’t stop when she clocked out. 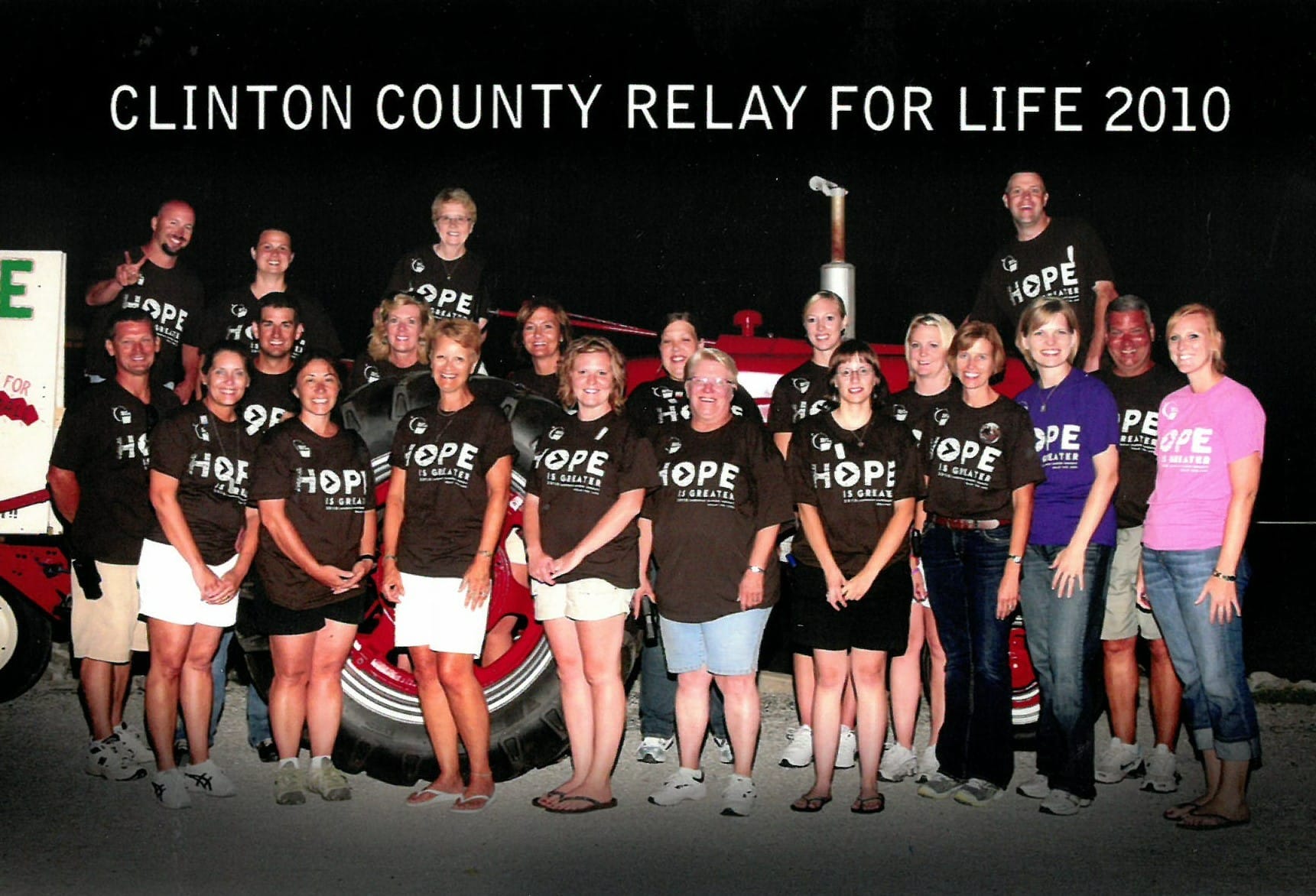 She’s served on the steering committee for Clinton County’s Relay for Life, organizing the all-night fundraising event for the American Cancer Society. Teams are formed months in advance and hold individual fundraisers leading up to the event, and she started by working on the Team Recruitment Committee for several years. Eventually, she became the event co-chair for two years.

She also volunteered with the local Humane Society, organizing fundraisers, and was the public meeting chair for eight years. That’s how she found her dog, Jas.

“She’s a mutt. She’s 15. I’ve had a dog in my life since 2nd grade.  My dogs have always been an important part of my life.  I’ve always been an animal lover.  There is so much to learn from them.” 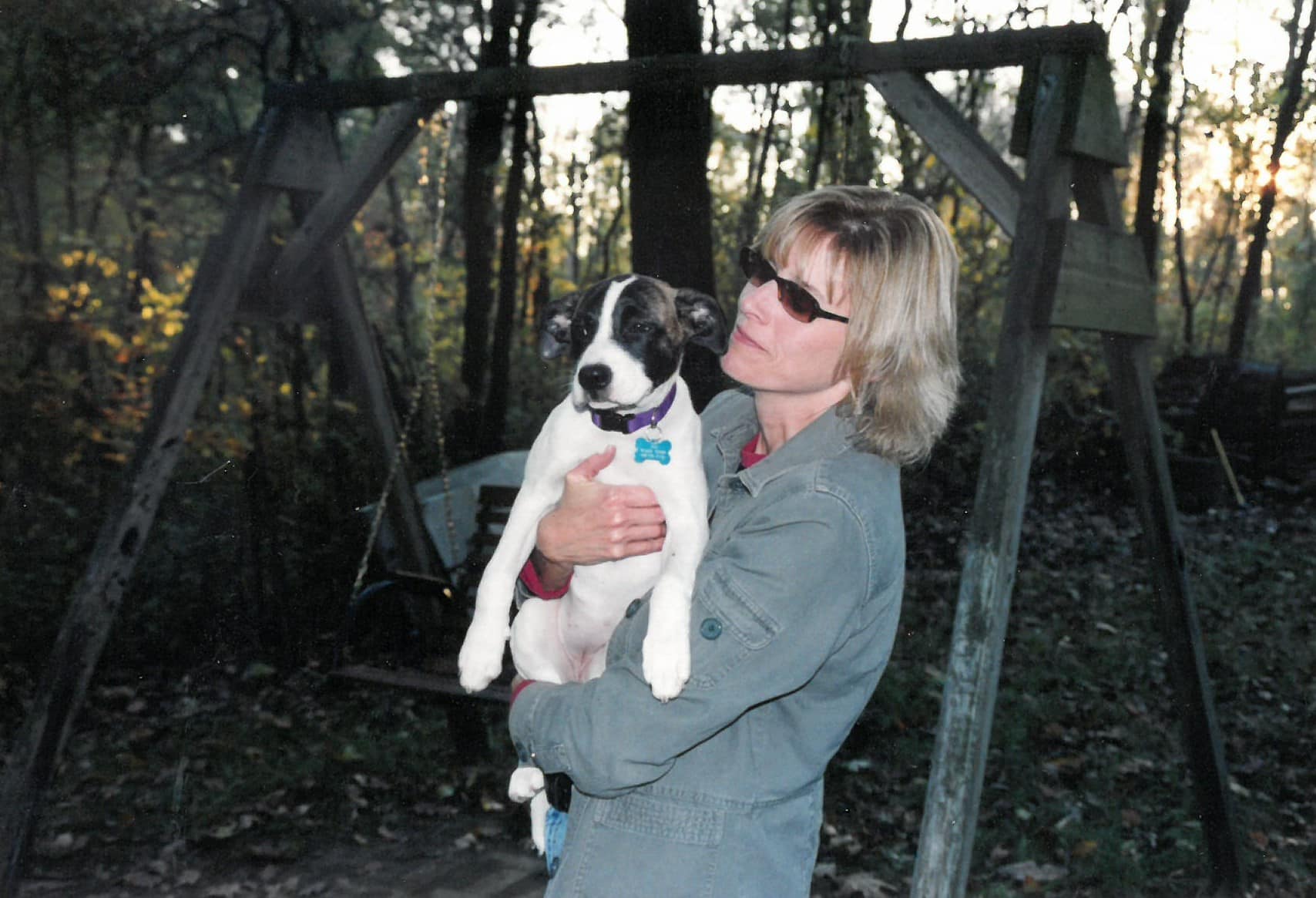 All those years of coordinating travel for The Korte Company also helped her organize personal vacations. She loves visiting Europe, especially Germany and Italy.

But she keeps her adventures closer to home these days so she and her husband can enjoy as much time as possible with 15-year-old Jas. They spend their free time exploring the outdoors by visiting national and state parks, hiking, biking, birding and even Jeeping.

“I’ve got a map in my hallway at home with push pins to keep track of where I’ve been and where I want to go. But I just love to be outdoors, watching birds and wildlife

Back at the house, she has her massive flower beds. She loves planting flowers and marveling at them as they grow through the seasons. Plus, the work itself is gratifying.

“I like the process of planning, shopping, digging, planting, deadheading and weed eating. It’s so relaxing to me.”

That day in, day out labor is not unlike her own journey and contributions at The Korte Company.

“I really never thought about what I was going to do the rest of my life. I just got married, we built a house and one day just got leading to the next and to the next and all of a sudden… 34 years went by. I just was always having fun, I was never bored, I was constantly busy. A lot of us have been here over 30 years. They’re like family.”

She watched coworkers get married and have children. Now, some of those children are her colleagues. It’s a legacy she’s proud to be a part of — and it shaped who she is today.

“When I first started, the whole atmosphere and attitude of the Korte family, the Korte team, they’re always such forward thinkers. Daily, you’re forced to think out of the box. We’ve always had this can-do attitude. Vernon Eardley was the president back then and he’d always say, There’re no problems, just opportunities.’ The management team still has that attitude.” 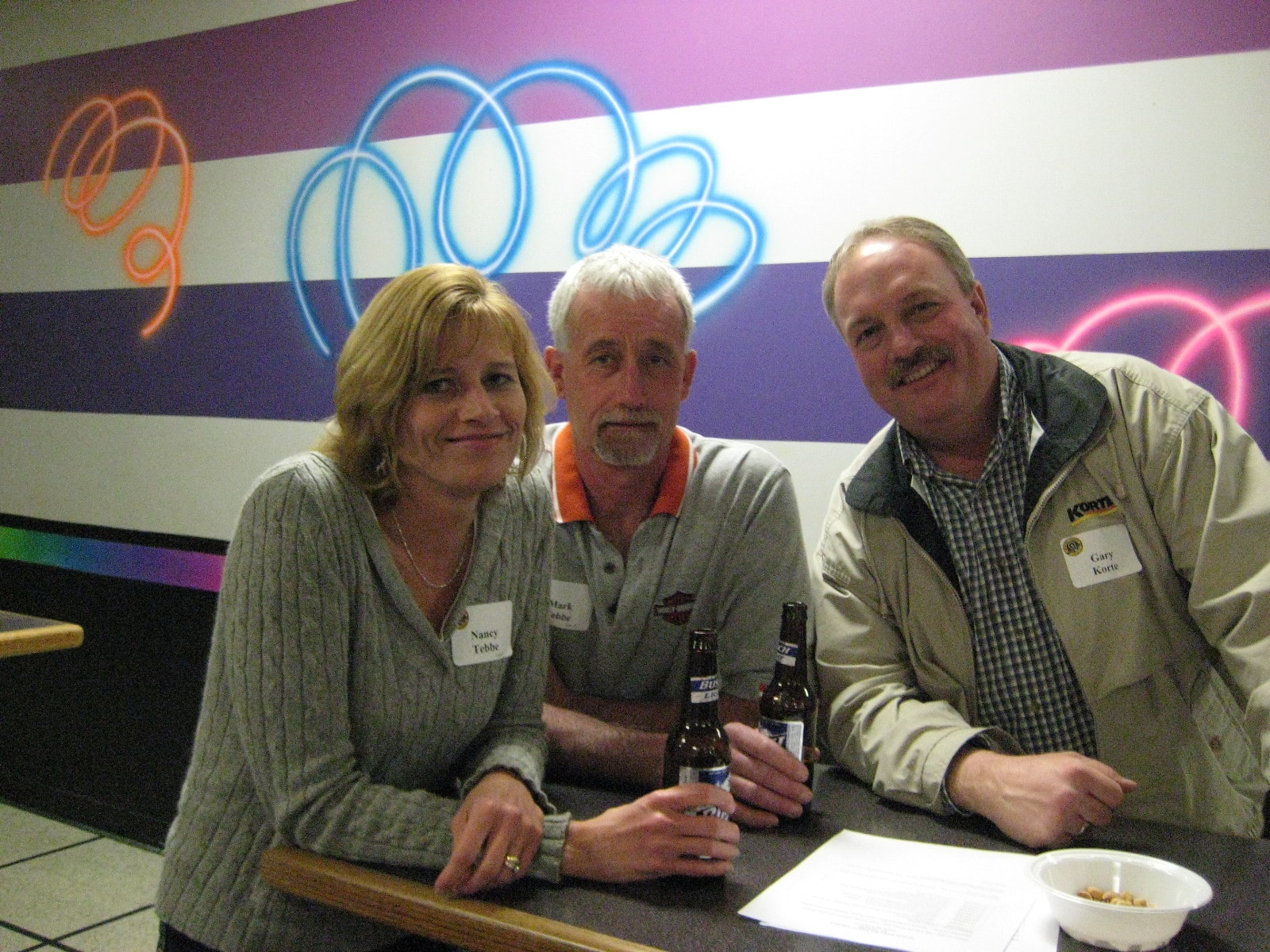 Tom retired in 2007 and Gary Korte took over his responsibilities. The construction industry is always changing and Gary was always eager to try new technologies. Since then, The Korte Company has grown its nationwide presence, and travel demands and remote communication are now just part of everyday life.

That growth mindset has always inspired Nancy. It undoubtedly shaped the can-do attitude she’s always brought to her job.

“Sometimes it’s like, I don’t know how we’re going to get this done, but we do, we get it done.”

And every day, she does.