The U.S. Army Corps of Engineers (USACE) awarded a group of its own for exemplary work on a construction project for the U.S. Department of Energy—a structure we couldn’t have built without the Corps’ expertise.

The USACE Nashville District’s Hedgehog award honors team members who went above and beyond, helping secure an on-time delivery while putting millions of dollars back in taxpayers’ pockets.

The building, a 64,000-square-foot combination warehouse and office for 300 personnel at the Y-12 National Security Complex in Oak Ridge, TN, was formally dedicated late last year. 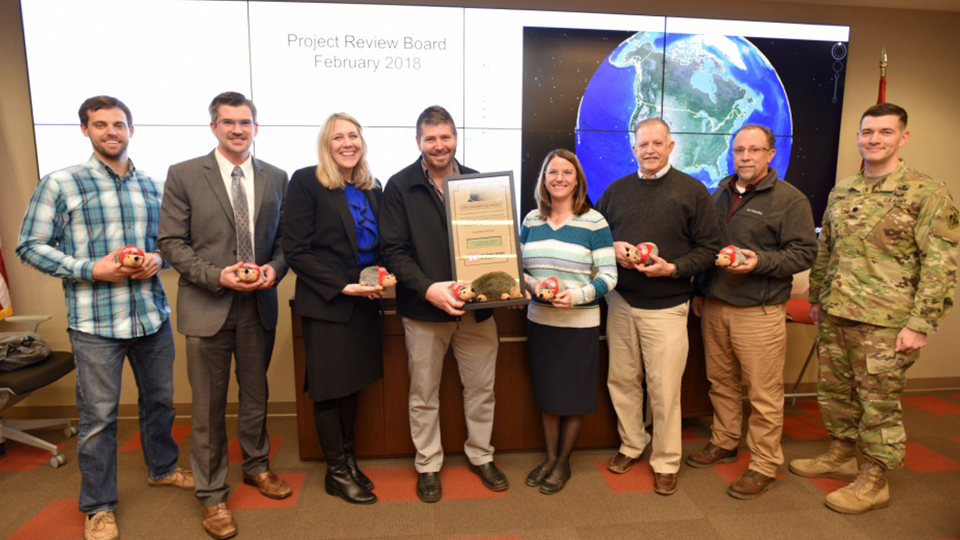 The USACE team receiving the honor was commended for working extended hours and weekends for five months. “To say that they had a challenging situation out there would be an understatement at best,” Lt. Col. Cullen Jones, Commander of the USACE Nashville District, said. “The bottom line, through this team’s efforts —contracting, legal, engineering, construction— they helped drive that contract to deliver on-time. And it was a complete team effort.”

The USACE team was nominated for the award by Nashville District Construction Branch chief Eric Pagoria. “An overall attitude of ownership by the entire team resulted in the overall success in delivery,” he said.

The value of on-site partnerships

We rely heavily on the expertise of our local partners on every job we do, but on this project, the USACE crew hit it out of the park. While the best-value solutions we offered on the job resulted in $5 million in savings as well as some key add-ons during construction, Army Corps site preparedness efforts led to an additional $20 million saved.

The finished product? A LEED Gold-certified structure featuring a site and design capturing maximum ambient daylight and that includes solar panels and geothermal wells. It all adds up to a potential life cycle savings of an additional $2 million.

We tip our hard hats to our USACE partners on this job. A whole lot went right during the project, much of it thanks to them. The award is well-deserved.

You can check out our complete résumé of government construction projects here.