Ralph Korte was fed up.

He’d been in the factory at the corner of 6th and Zschokke streets in Highland, Illinois many times to talk about problems with the building. On every visit, the factory’s managers complained about the state of the structure: It was flimsy. Its roof leaked. Too much snow and the whole place would cave in.

And after every visit, the message handed down from distant corporate bosses was the same.

So when the firm requested a meeting with engineers from The Korte Company for the umpteenth time in 1987, Ralph insisted on attending.

“I was tired of them doing nothing,” he said.

But they swore this time was different. The papers inside a manila folder they handed Ralph proved it.

The building stretched 600 or so feet along 6th Street between Zschokke and Olive streets. It was slapped together of lumber and sheet metal over a concrete pad in the early 1920s.

Alton Box Board, a firm based in nearby Alton, Illinois, took over the site to expand its box making operations after World War II ended.

According to Ralph, throughout the early- to mid-1980s, top brass in Dublin kept refusing local managers’ requests to renovate or replace the facility. It was “dumb,” they’d said. They couldn’t afford it.

Ralph was perplexed. “When snow was in the forecast they’d stack coils of paper up three high to shore up parts of the roof they thought would collapse.”

But all that went out the window once a structural engineer from Omaha walked through. Maybe he saw the stacked paper coils.

“His report said ‘this building is unsafe to occupy,’” Ralph recalled. “So now they had no choice.”

In Dublin, corporate relented, carving out funds for a replacement facility.

Eddie Huelsmann has an idea

Ralph stewed over the best way to replace the facility in the face of a major hurdle: Jefferson Smurfit did not want to shut down operations.

As a major supplier of cardboard boxes destined for the Anheuser-Busch brewery in St. Louis, the company kept a pair of 250-foot-long corrugators running all day, every day. If they shut those down, Anheuser-Busch would find someone else to make beer boxes. Down time was not an option.

Jefferson Smurfit wanted The Korte Company to do the work, but they also shopped around for other bidders. Turns out, no one was interested. “They wouldn’t touch it,” Ralph said.

Ralph knew what he wanted to do—build a pre-engineered Butler building to replace the old sheet metal shed—but he didn’t know how, not without disrupting manufacturing operations.

Eddie, a brother-in-law married to one of Ralph’s sisters, had worked for Alton Box Board and then Jefferson Smurfit for three decades. He knew the facility back to front.

“Why don’t you build the new building over the old one?” Ralph recalled Eddie asking. “Then, just tear the old building apart from the inside.”

Ralph was confident it could work. Setting columns and then hoisting trusses and workers to install them from above was doable. Some of the steel columns that would hold up the new building would have to be sunk through the existing building’s brittle roof, but that wasn’t really a problem—just patch the roof back up once you sink the column.

The issue was the way the new building was initially engineered. It called for a few of those interior columns to be placed within the footprint of those corrugators. And the corrugators, Jefferson Smurfit insisted, could NOT be moved.

Butler’s and Ralph’s engineers worked out a solution: Shift the interfering columns four feet from their original locations. The math indicated there would be no structural consequence to what Ralph called a “really intricate piece of engineering.” 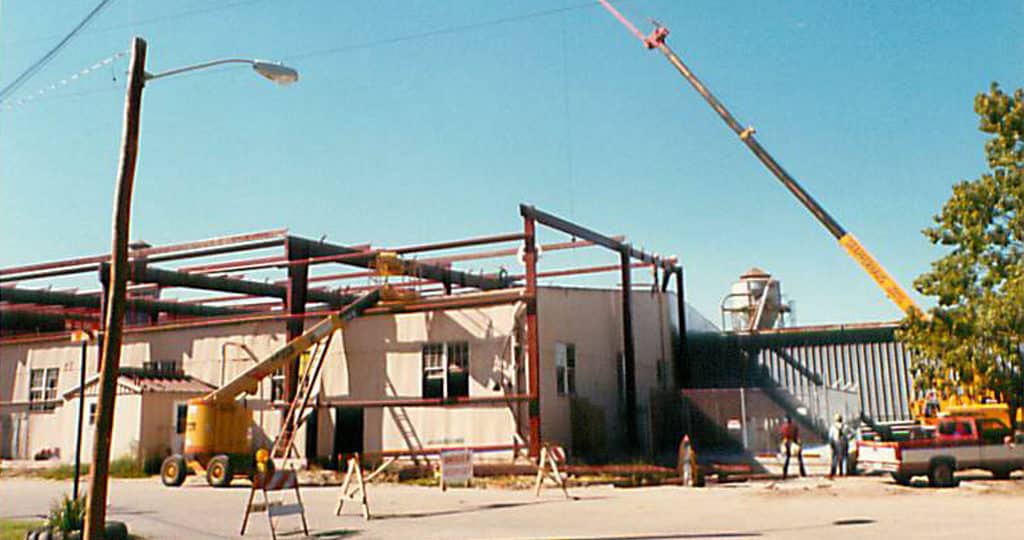 With that problem solved, The Korte Company got to work—literally. The majority of the work was self-performed, including footings, foundation, steel erection and demolition.

Korte crews began by pouring new footings and setting exterior columns along the outside of the existing structure. The new building’s outer wall would go up just two feet beyond the existing building’s walls.

Then, the interior columns were dropped in through holes cut in the old roof and set in place. After that was done, no construction crews ever went inside the old structure until demolition.

Finally, the new structure was enclosed, first from the top and then around the sides. With that, the first phase was complete.

Getting rid of the old structure was just as challenging as erecting the new one.

No traditional demolition equipment like wrecking balls or bulldozers would fit inside the structure. It had to be slow and methodical so that waste materials wouldn’t pile up or get in the way of production equipment.

Fortunately, we had time. The facility was operating 24 hours a day anyway, so it didn’t matter how long demolition took as long as we didn’t break anything or hurt anyone.

It was three weeks of slow, steady work, never involving more than three workers with hand tools. They took the old structure down piece by piece from scaffolding they’d built along the walls. They even built platforms over the corrugators to catch falling debris during roof and ceiling demolition.

“We could take our time,” Ralph said. “And it was all done without accidents. No one got hurt.”

An unexpected perk accompanied the demolition. Ralph remembers piles of old lumber and sheet metal set outside the building kept disappearing. Evidently, Jefferson Smurfit employees who had pickup trucks and a need for scrap hauled the stuff away of their own accord.

Jon Hardy, a WestRock plant manager who’s worked at the Highland plant since 2005, is proud of the work The Korte Company completed in 1987.

“The building is great. It was very well-built and provides the shelter we need,” Hardy said. “This is the only building I’ve ever seen that was built the way The Korte Company did it. The thought of taking a building down around the people working in it—I don’t know how well that would go over today.” 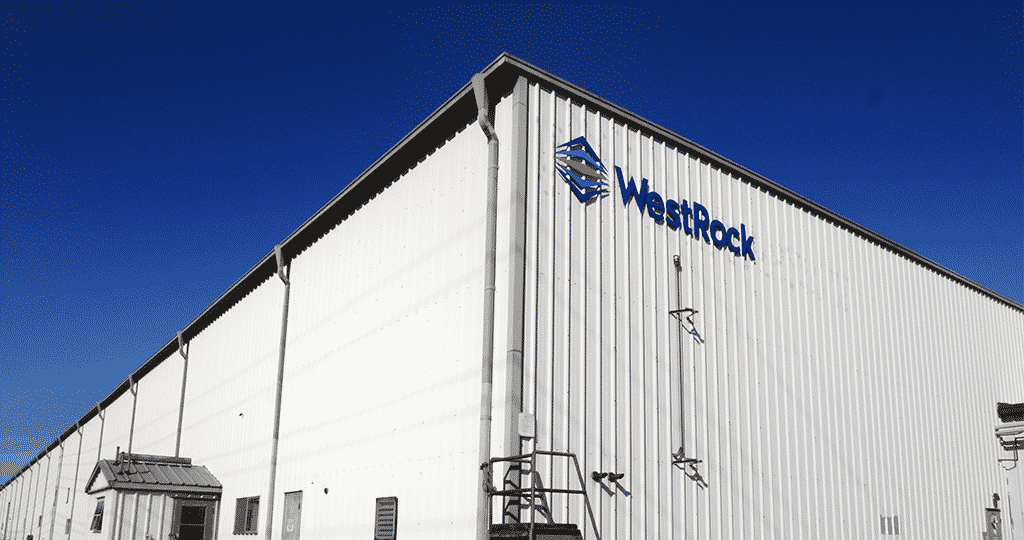 And 32 years later, Ralph is still proud of the project, too.

“That piece of junk was turned into a good-looking manufacturing building,” he said. “You were ashamed to drive by it, it was just a metal shed falling apart.”

And fortunately for The Korte Company, the project was profitable.

“It’s something I’m proud of. It was risky. But Korte is a problem solver,” Ralph said. “That’s what we do best, solve problems.”