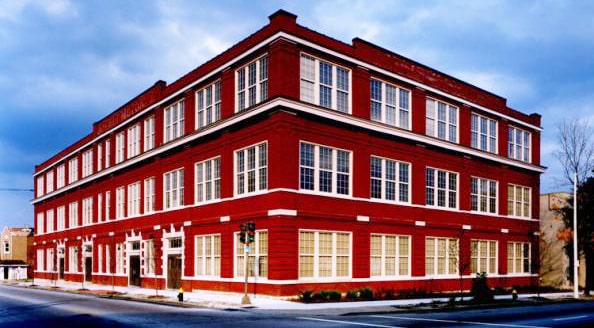 At The Korte Company, we’re proud of our St. Louis roots. Our St. Louis construction company started building in 1958 with three people, a truck and a saw. Today, we Design-Build all across the country, but we’ve never been prouder of our home. To celebrate St. Louis’ 250th birthday, we’re remembering some of our most historic builds in the St. Louis area.

Past, present and future

Some monuments remind us of a bright past. Others make us imagine a smarter future. Only the rare landmark can snub time by reminding us of a proud past and pushing us to a promising tomorrow. But look just past the St. Louis Arch, and you’ll find such a place. It’s called the CET. The letters stand for the Center for Emerging Technology, but to us, they mean a whole lot more.

A center for the future

The storied building that we renovated in 2004 has an address, 4059 Forest Park Ave., just East of beautiful Forest Park, right in the heart of the 200-acre CORTEX Innovation Community. One painted sign on top of the 103 year-old building’s outer wall still says “Dorris Motor Co,” and that’s a story we’ll tell in just a few paragraphs. It will soon be updated for the CIC@CET, is currently used by the CET and is operated under the umbrella of CORTEX. CORTEX is a nonprofit organization focused on bringing entrepreneurship, jobs, and revitalization to a core area in St. Louis City.

Formed in 2002, the nonprofit’s founders include Washington University in St. Louis, BJC Healthcare, the University of Missouri – St. Louis, St. Louis University, and the Missouri Botanical Garden. That’s an impressive list of some of St. Louis’ most forward-thinking organizations. But more important though is why they stand together. They’re reaching for a goal that takes the slogan right out of our mouths.

What does that mean? To us, it means building something with meaning, and doing it the most efficient way possible. That’s why, in our 56 years of building in St. Louis, one of the builds we’re most proud of is renovating what was once a car factory and turning it into the CET.

The work they do over at the CET

The CET, operated under the CORTEX umbrella, provides biotech startups with access to specialized facilities, entrepreneurship training programs, support services and funding. These startup companies operate in the spheres of bioscience and medical technology, and they create the kinds of economic opportunities that St. Louis needs. The CET helps push startups along to their innovations, much like new and budding startup programs like Arch Grants and the T-REx Incubator. As one of the first startup accelerators in the area, the CET helped lay the first foundational bricks in St. Louis’ thriving tech startup corridor, where forward-thinkers build new companies, incubators and support systems left and right. Today, CORTEX is dedicated to creating more and more opportunity right here in St. Louis.

The CET building is in an area that was once home to many of St. Louis’ most productive facilities, and the CET building itself once housed a thriving car factory. In many ways, the story of the building tells the broader story of St. Louis’ business fortunes. Many people don’t realize it, but St. Louis City currently employs the nation’s fourth largest manufacturing workforce of all U.S. cities, and the area produces many of the nation’s products across a vast spread of industries.

Looking back in time, St. Louis City had the nation’s fourth largest metropolitan population at the turn of the 20th century. In 1905, St. Louis hosted the 1904 World’s Fair and 1904 Summer Olympics. In 1911, the beginnings of the world-renowned St. Louis Zoo took shape in Forest Park, under the leadership of the St. Louis Zoological Society. For years, St. Louis grew as a diverse and thriving economic center, but after World War II, many of the area’s residents moved out to surrounding areas, and the core city saw economic decline and trying times.

But in the 1980s, armed with the philanthropic might of St. Louis’ people, leaders and businesses, a movement took shape to revitalize the city. And today, after three decades of hard work, many areas, such as Laclede’s Landing, Washington Avenue, Midtown, the Central West End and the Delmar Loop, have experienced a renaissance of sorts. The CORTEX Innovation Community is a growing area, right in the heart of the city. And it’s becoming a bright light that reflects the area’s history and resurgence. 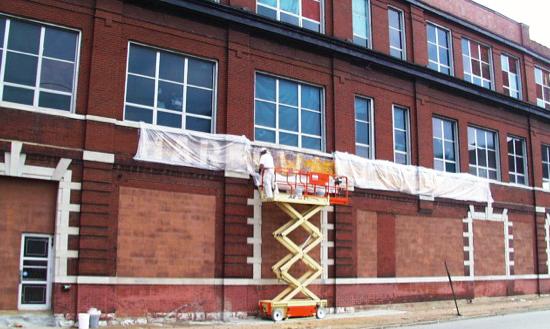 The history of the CET building

In the same building where startups, venture capitalists and brilliant innovators now create tomorrow’s medical and technological solutions, one of St. Louis’ most inspiring historical entrepreneurs once manufactured some of the nation’s most innovative cars and trucks.

In 1898, George Preston Dorris and his long-time friend, John L. French, founded the St. Louis Motor Carriage Company. They aptly named their first car The St. Louis. It sported a patented 1-cylinder engine, clutch assembly and transmission all in one unit. That was the first car that ever combined those elements, and modern cars still use a variation of that assembly.

Dorris, recognized as one of the first and greatest automobile innovators, also pioneered the float-feed carburetor, one of his lasting legacies. Drivers everywhere should remember Dorris for that float-feed carburetor, since it allows gas to flow into the engine at a consistent pace without drivers having to constantly maneuver different gasoline valves.

Dorris’ partner, John L. French, passed away in May 1903. In 1905, French’s brother, Jessie French Jr., moved the business to Peoria, Illinois. Thankfully for St. Louis, Dorris stayed behind and opened the Dorris Motor Company, releasing a practically hand-built car that would sell for nearly $7,000. It was named The Dorris.

Just how many car companies were there in St. Louis? According to an article by Michael A. Capps in The Museum Gazette, St. Louis was home to 219 car manufacturers from 1900 – 1929, and the Dorris Motor Company was recognized as maybe the best of the lot. By 1920, the factory had been expanded to several buildings that took up nearly a full city block. The CET is in one of those buildings, at 4059 Forest Park Ave. And today, entrepreneurs work in that very same building, drawing 21st century jobs to St. Louis.

St. Louis was and still is one of the nation’s most important manufacturing cities. New car plants that bring new jobs and new technologies have helped make St. Louis become what it is today, and the Dorris Motor Company contributed to St. Louis’ auto industry — even after ceasing production in 1926. With an auto manufacturing history, industry and workforce rooted in the area, the St. Louis region has been home to Ford, GM, Chrysler, and Toyota plants through the years.

Many St. Louisans are too young to remember, but the city has historically been home to one of the nation’s thriving shoe manufacturing centers. Mom and pop shoe stores occupied plots on many streets, and many of their shoes came from factories just west of the Mississippi.

Though the Brauer Brothers Shoe Company moved on, and the building sat dormant for years, today, it’s in good hands. In 2000, the old Dorris Motor Company Building was added to the National Register of Historic Places. The US government has recognized it as a historic site worth preserving. And we’re happy to see the CET not only preserving its rich history, but adding to it as well. 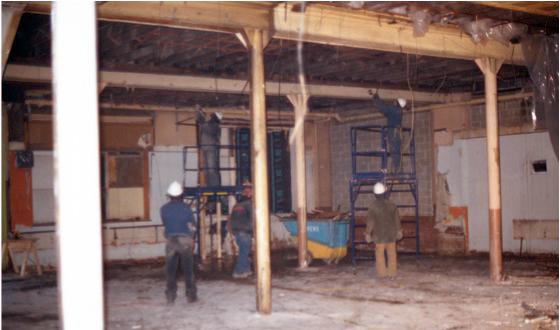 The Korte Company’s work on the CET building

In 2004, the CET had a space on Forest Park Avenue but needed to expand in order to meet the rapidly growing needs of their high-tech tenants. That’s where our Design-Build expertise came to play.

The CET purchased a neighboring building, the same building that once housed the Dorris Motor Company, and set forth to revive an unused center of economic potential. We renovated the 93-year-old factory building, turning it into the 50,000 square feet of customizable workspace that now houses local entrepreneurs.

Though built in 1907, the building withstood the test of time remarkably well, and you can still see the original bricks throughout the building’s walls. But when we renovated it in 2004, much of the building had deteriorated through nearly 90 years of gravity, weather and manufacturing. To ready it for everyday, 21st century use, we had to perform an extensive renovation.

Jason Mantle, VP of Preconstruction here at The Korte Company said, ”We pretty much gutted the whole building down to exterior walls, two load-bearing interior masonry walls, and the floor joist that was left of the wood floor deck.”

Once we pared the building down to its core, we preserved much of the original wood floor deck and readied it for the new floors that we installed throughout the building. We also resurfaced the brick walls and partnered with Superior Waterproofing and Restoration, who blasted the walls with walnut shells to remove thin layers of decades old paint without damaging the underlying bricks.

For the architectural design, we partnered with Mackey Mitchell Architects to deliver a superior space that not only accommodates the CET’s needs but impresses a stunning, 21st century visual effect on the building’s occupants.

The importance of open communication

As you can imagine, we ran into our fair share of snags while sculpting this nearly 90 year-old car factory into a biotech incubator. But we still managed to deliver the build on-budget and on-time. How? Our Build Smart philosophy truly made the difference. The key factor in our secret building formula is an open line of communication, and we put it to full effect in this build.

Though the build threw its complexities at us, the open line of communication kept us nimble. Through detailed planning, clear communication and superior design, we completed the $5.2 million project in 10 months — ahead of schedule and under budget. 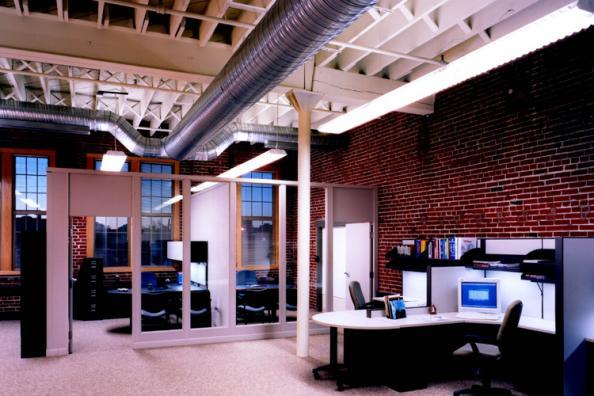 Preserving the past while building the future

We couldn’t be more proud of the impact this building will have on St. Louis’ future, but we also know the importance of preserving the past. Every past innovation brought us here, even the little ones, so we have preserved remnants from this factory to remember the work of others.

But we didn’t just keep historic pieces, we turned age-worn coal into sparkling diamonds. At the request of the owner, we took an old radiator from the Dorris Motor Company factory and built a desk that’s currently in use in their boardroom — with the radiator visible at its core. We also refurbished an industrial, fireproof door that used to protect the factory, and though it’s no longer functional, it can still be seen today. In the event of a factory fire, the high temperatures would have triggered the door to shut, preserving lives and machinery.

Thanks for reading about this historic build. We’d be honored to have you follow along with us as we chronicle more of them this year.

At The Korte Company, we’re proud of our St. Louis roots, and we’re proud to have built some of the area’s most recognizable — and useful — landmarks. To read more articles about historic builds and learn about Build Smart construction, click below and sign up for our Build Smart Newsletter.