The San Francisco International Service Center is a 250,000 square-foot structure in Daly City, California that we’re proud to have helped renovate and build.  With this distribution facility project, it wasn’t all groundbreaking and ribbon cuttings. In fact, this was one of the more challenging, and interesting projects, on which we’ve ever worked.

The distribution facility building, owned by the United States Postal Service, was in dire need of an overhaul. Then 40 years old, the structure required asbestos and lead abatement services, total removal and replacement of the interior façade, and a complete replacement of outdated dock equipment and structures. 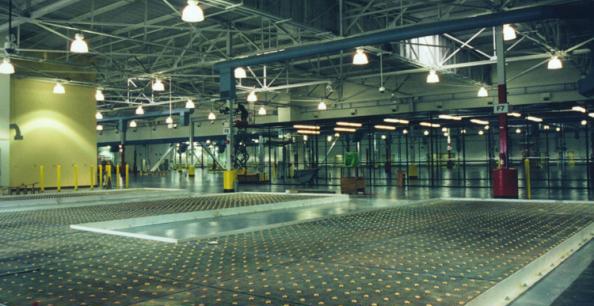 On top of all that, it stood a mere mile from the San Andreas Fault, necessitating massive structural reinforcement against seismic activity.

This type of “gut-rehab” project is the stuff we at The Korte Company live for. Expansive warehouse construction projects like this one allow us to display our versatility while putting our stamp on an institution that serves the American people daily. So when we learned that the schedule was tight, a mere six months from design to completion in fact, we knew we were up to the task.

“The job is boss.” That’s our M.O. here at The Korte Company. It means no excuses. It means not bowing to circumstances beyond our control. We just had no idea how far this job would push our commitment to that ideal. The motto of the post office is rain or shine, sleet or snow. We couldn’t let them down. And here’s where it gets really interesting.

While excavating near the foundation of the facility, we unearthed the remains of two Native Americans – a mother and her child. The presence of such ancient remains requires an amount of detailed care that can set a project back months. Further digging was immediately halted until arrangements could be made for the bodies to be exhumed and relocated.

Luckily, a local shaman volunteered to perform a cleansing ritual and oversee the removal of the remains. Within a few weeks, they were transferred to a nearby burial ground and digging for the distribution center construction project was able to resume. The project proceeded to completion under budget and ahead of schedule.

At Korte, we don’t commit to deadlines lightly, but we also don’t believe in abandoning decency and respect in order to meet them. So it’s a good thing building smart means being flexible, taking initiative and being proud of the work you do. On this project, and every project, the job is the boss. We’re proud to work by that daily.