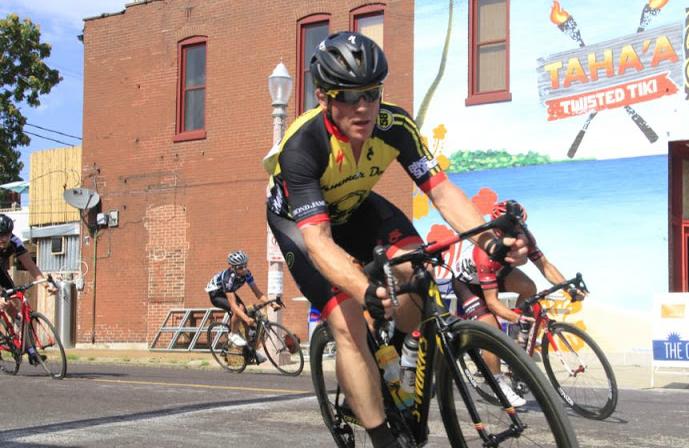 He’s been here for years — four actually. Brent Korte has proudly donned the Hammer Down jersey since the team’s inception. On his journey from new rider to grizzled veteran, he’s poured in hours of dedicated, merciless training to move up the ranks. And after a truck hit him on a training ride, leaving him with six broken ribs and a punctured lung, he was back on the bike in two weeks. In this Hammer Down Q & A, we introduce you to Brent Korte, a man on a mission.

Could you describe your role on the Hammer Down team?

I’m a sprinter. Being a (category) 4 racer, it depends on who’s in the race with you. I would classify myself as more of a sprinter.

How long have you been riding? How did you get started?

I only started riding about two years prior to the start of Hammer Down racing. I used to be athletic when I was in high school, took some of that into college and lost it from there. Cycling was something I took up as a hobby to get into a little better shape.

What about cycling draws you in and makes you want to compete? What motivates you to do it?

Once I did that first race, I knew I wanted to do it more in competition. Seeing how far you can push yourself and see what extent you can take it.

This year, there were two of us at the Indy Speed Track. It’s 100 miles, 2.5 mile laps, 40 laps around the speedway. It was a timed event with about 100 cyclists. 10 or so were together, two were Hammer Down team members, and the other eight were friends of ours. We had a goal of doing it non-stop in under 4 hours, and I completed it in 3 hours and 58 minutes. That’s 100 miles. And after, I still felt pretty good. I was amazed.

What are your goals this season?

My goal is to get myself to a level where I can get to a Cat 3. Two years ago, I was potentially there, and then last year I had an accident on a training ride with a truck that wiped me out for the entire season. I had points sufficient to (get to Cat 3), but because of missing the season last year, I’ve gone back as a Cat 4.

Could you talk a little more about coming back from injury?

One of the guys I ride with — he joined the Hammer Down team this year — he and I were on a training ride April 15th last year south of Highland. He was on the left; I was on the right. A truck was coming head-on toward us and made a left hand turn right in front of us. My partner swerved and avoided it. I ended up throwing myself right into the back corner of the truck and got a punctured lung and six broken ribs.

I was in race-ready condition, so I was in extremely good condition when it happened. So, about two weeks afterward, I had myself back up on a mountain bike. By Memorial Day, I was up on a road bike. I wanted to race at least one race by the end of the season. I did two races: the Edwardsville Crit in August and the Labor Day Gateway Cup in St. Louis.

What kind of hobbies do you have outside of cycling?

I used to have hobbies. I used to be a golfer, but with the amount of time that I cycle and train, that’s something I had to give up. There’s the occasional charity event or something like that. Cycling is my hobby right now — and watching my kids play sports.

Could you describe your training routine? What does it take to be a successful cyclist?

I train pretty much year-round. Road racing and crit racing is what I do. When road is done, pretty much in September, I continue to ride for fun. I take a month or two off, build my endurance over the winter then start transitioning into more high intensity race training in March. I’ve penciled out a program, hours per week, days I’m going hard, days I’m doing longer duration.

A little more about Brent Korte