Jason Weiss is humble, almost to a fault. If you ask him what he does at The Korte Company, he’ll say it’s hard to explain, but it always comes down to two things: treat people with respect and make sure the job gets done right — whatever it takes.

Truth is, as the executive vice president of operations, he has a hand in just about everything that happens on the operational side of the company. From project management and field operations to design, recruiting and quality control, there’s not much Jason isn’t involved in

“In my world, it’s just a title. When we come to work, we do whatever it takes to try to help people and work together and get it done. It’s not an ego thing.”

“It feels like family. And I think a lot of people feel that way here. It’s that type of business and it’s how we do business.”

Working for a company that treats employees like family means a lot to Jason, who was forced to set out on his own at an early age. But more on that later.

Jason first joined The Korte Company as an assistant superintendent nearly two decades ago. With hard work and dedication, he steadily worked his way up. And after 18 years, he became the executive vice president of operations.

In his day-to-day, he works closely with his team leaders, the vice presidents and directors who oversee and manage the operations teams. That’s more than 150 people, all working together. And although the title sounds like a desk job, it’s anything but. His hands-on approach requires that he spend the majority of his time traveling between offices and locations across the country, where he’s better able to manage and support his colleagues — or rather, his extended family.

This doesn’t just require a knack for logistics and tactical thinking. It takes heart.

And that’s exactly why Jason’s so good at it. 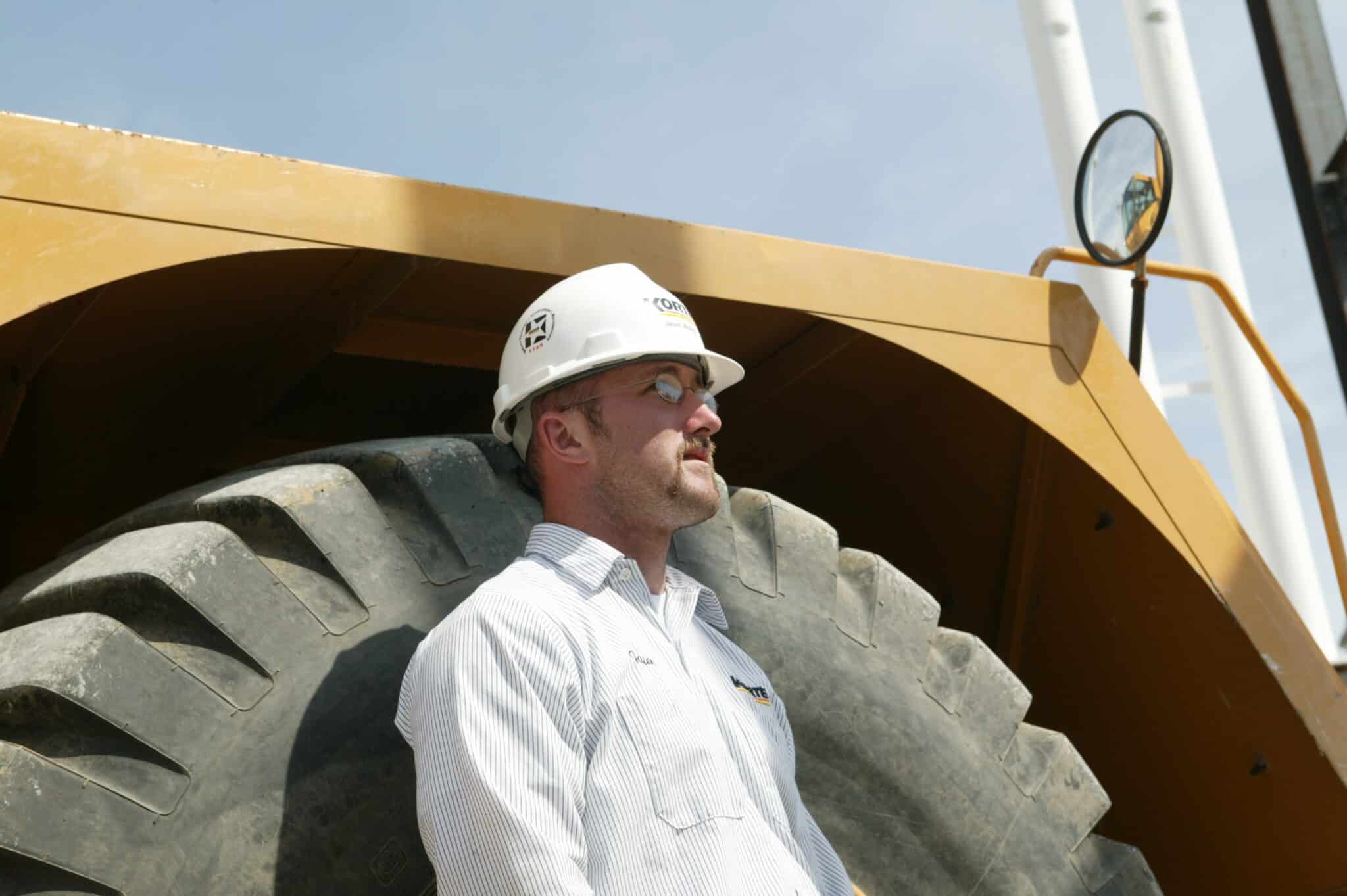 “You can come from nothing and succeed”

“People that don’t know me probably think I’m some kid that had everything handed to him, and I never did,” Jason says. “It’s nice to have that feeling that you can come from nothing and succeed.”

Jason grew up in Highland and, in many ways, was just like any other kid. He went to the community school, played little league and seemed like a typical boy growing up in a small town. But on the other hand, there was something that wasn’t the same.

“I didn’t have a healthy living environment as a young child and was removed from the home situation. That gives you an idea of how things were.”

It’s a matter-of-fact statement that Jason shares without a flinch of self-pity. He’s not one to feel sorry for himself.

From five to his early teens, he lived with his grandparents. He learned at a young age what it meant to work. He helped fix and rebuild motors with his grandpa in the garage. He also cut lawns and worked on local farms, pitching in with whatever needed to be done.

He fondly remembers those farm families, and a series of other host families, who took him in.

“I was just happy to have a place to stay. That’s the way it was: work hard and do whatever it takes.”

He was learning a critical life skill that would benefit him in adulthood: perseverance.

Eventually, he started picking up other jobs, like helping at the local car dealership by moving cars and cleaning up the shop. He always figured he’d probably be a mechanic after finishing high school.

It was Jason’s sister who noticed his interest in wanting to know how things worked and how they were made. She convinced him to apply to Southern Illinois University of Carbondale. There, he excelled in math and accepted an internship as an engineer at the nearby Maytag plant.

Eventually, he left Maytag for a Highland-based real estate company that also had a construction division. A year and a half later, a chance encounter with Ralph Korte would change his life forever.

Jason was working on a local real estate project and had come into The Korte Company’s Highland office to discuss details of the project with his boss and Ralph Korte.

“The offices were impressive. It was like playing for the big leagues,” Jason recalls. But that’s not the end of the story. “During that meeting, Ralph Korte said that I ought to just come work for him. He said it right in front of my boss. Ralph’s pretty bold.”

Jason was happy with his employer at the time, but business is business. As a young man who had already overcome so much, he’d learned to never turn down a good opportunity.

He started as an assistant superintendent in St. Louis. Back then, the onsite lead was Jerry Dininger, who taught Jason much more than he expected. Not only did Jason learn what it took to manage a successful project, but under Jerry’s mentorship, he also learned what “The Korte Way” was all about. On that first project, he honed core Korte values like trust, dedication, leadership, hard work and a passion for learning.

Next, he became a superintendent and hit the road. For the first time in his life, he started flying to far-off locales like South Carolina and New Orleans. And just like that, the kid who grew up without much was suddenly a jetsetter.

“It was a big deal to me back then. But now it’s second nature. I’m on a plane every other week.”

One of the most memorable projects of this period of Jason’s life was restoring the USPS facility in New Orleans.

After Hurricane Katrina hammered the city, The Korte Company sent a team to start assessing the damages. Jason was the Superintendent on the $13.2 million job.

In addition to getting the site back to its pre-hurricane condition, his crew upgraded several sections on the second floor to accommodate more modern electrical equipment, keeping it out of the flood zone and protected from any future damage. And they did it all while the facility was still operating and finished 83 days ahead of schedule.

It was a huge career win for Jason. It was also a huge learning experience.

“It was eye-opening seeing the struggles of what Mother Nature can do. It was a mess. It was a tough time for that city. And as the superintendent on that job, I was still understanding how to work with people from different areas and different cultures, learning what it takes to make people successful from all avenues.”

Whether he learned those lessons in childhood, brought them home from New Orleans, or picked them up on the many other projects he’s worked in his tenure, he applies it all to his job today.

Making the most of the worst

After that three-year stint as a superintendent, Jason returned to Highland to run the small projects division. Later he became a project manager, and then the executive director of project management.

The New Orleans project opened his eyes. And over the years, he learned to recognize what makes people tick. Some love deadlines. Others strive for efficiency. Many just want to provide for their families.

Jason describes his management style as open, relatable and willing to help. Even though he’s in a top role at The Korte Company now, he’ll always be the kind of leader who remembers his roots — and it’s this exact humility that makes him so approachable.

“I’m a very good listener, and people are comfortable with talking to me no matter what.”

These talks are often just casual check-ins. But sometimes, his employees need heart-to-hearts and outside support, too.

“Mental illness is a concern, and we offer help for everybody in the company. The support that you give people is important. Sometimes, offering help is as simple as talking to the teams to help them understand what happened and how we can prevent it going forward.”

Those are the more extreme demands on his job, though. On the day-to-day, he’s doing everything from helping project managers learn how to negotiate bids better to sitting in on preconstruction meetings. He considers them all a part of his family and strives to keep them employed, happy, successful and safe.

“Every day in construction, you’re always going to have ups and downs. But if you feel you’ve put in your best when you go home at night, then you’ve done the right thing. Everybody asks me why I worked for Korte for so long. It’s because we always strive to do the right thing no matter the situation.”

The “do-the-right-thing” philosophy is one Jason lives every day. The part of his job he loves most is giving people what they need to succeed. Sometimes that’s finding counseling services for a struggling crew member, and other times that means making certain every project is delivered just as it was promised.

Jason also strives to give back outside of work, too. He sits on the Construction Leadership Institute for the SIUE Advisory Board, where he helps guide and prepare the next generation of construction leaders.  He’s also the co-chairman of the Anderson Hospital Foundation, where he assists with fundraising.

And for all that he’s achieved, he’s never forgotten his roots. So it’s no surprise that the philanthropic effort closest to heart is his work with the Child Advocacy Center (CAC) for Madison County.

“It’s for kids who have gone through struggles, and this place tries to help them. It hits home, so I try to help with that.”

As a member of the CAC advisory board, he uses his leadership skills to assist with hiring and everyday business operations. The organization provides trauma-focused therapy, forensic interviews and case management services for children who have been abused.

Jason identifies with the children he helps, but he doesn’t let that distract him from the joys of the present. Today, he and his wife Christy are raising their three children in a home surrounded by love and support. It’s his most fulfilling project. 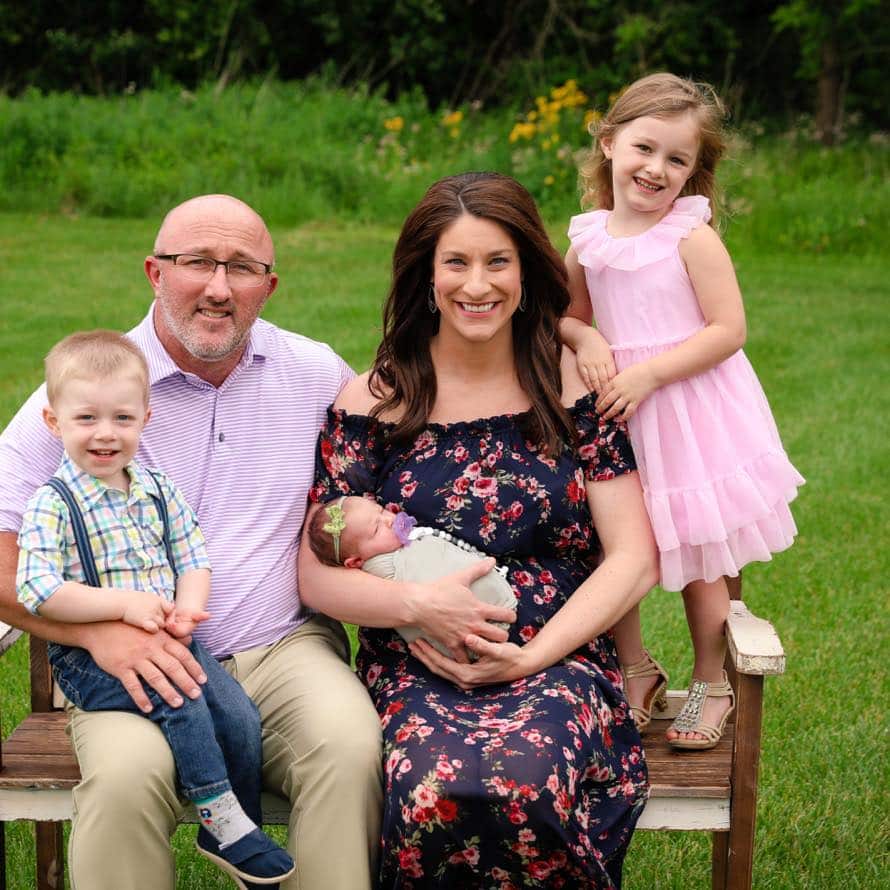 “I spend a lot of time with my kids. I love being a father. I didn’t have a great childhood but giving them what they need… it’s a great feeling.”

He’s worked hard to build a good life and provide for his family. And he’s never forgotten what he’s worked so hard to overcome.

He cherishes the time he’s able to spend with his family and is truly thankful for the ability to provide them with a better path, a better future.

It’s a journey that started many years ago. It’s bittersweet — but mostly sweet.

Because that journey is exactly what made Jason the man he is today: husband, father, vice president.

After all these years, he’s finally at home.