Meaghan Daiber never broke 5’2”, but she’s got the kind of presence that makes people say, “Huh, I thought she was taller.”

Maybe it’s because the sheer force of her bubbly personality contradicts her size. Her tenacity drove her to become a long-time basketball player, height be damned. And that same spirit didn’t flinch over a childhood stumbling block — some unusual bones in her feet — that might’ve tripped up someone with a weaker constitution. 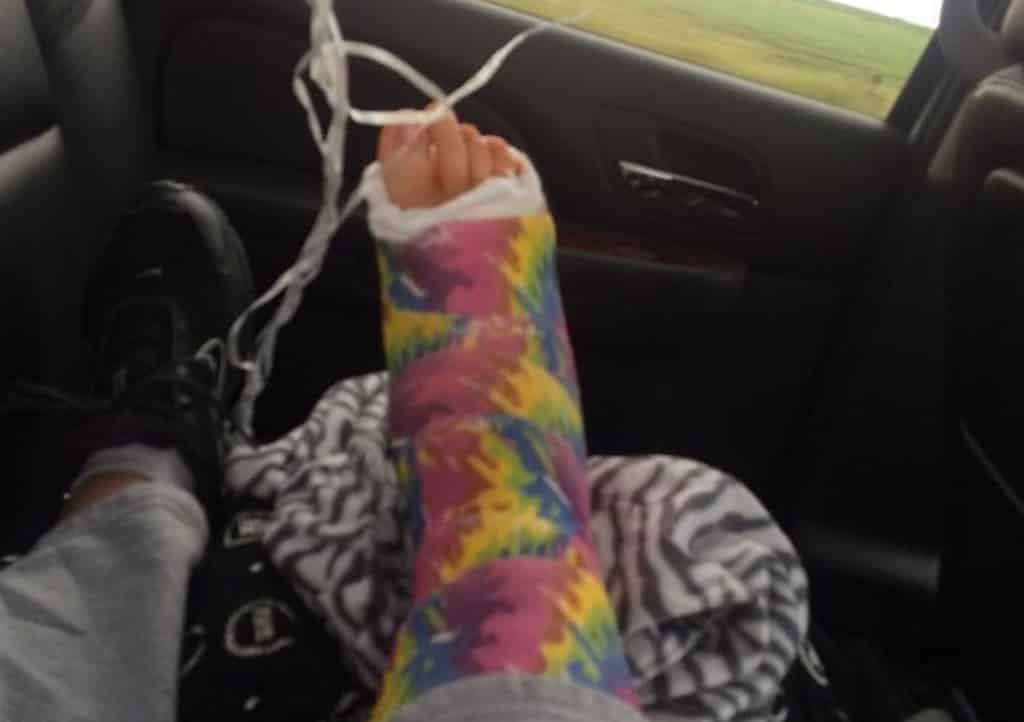 These days, the extra bone story is almost a punch line, the kind of thing Meaghan might say at a party to spark chatter when conversation lags.

But it’s an event she can’t forget — not because of any lingering trauma, but because of the fact that it led her from her tiny Southern Illinois hometown to the St. Louis Children’s Hospital. 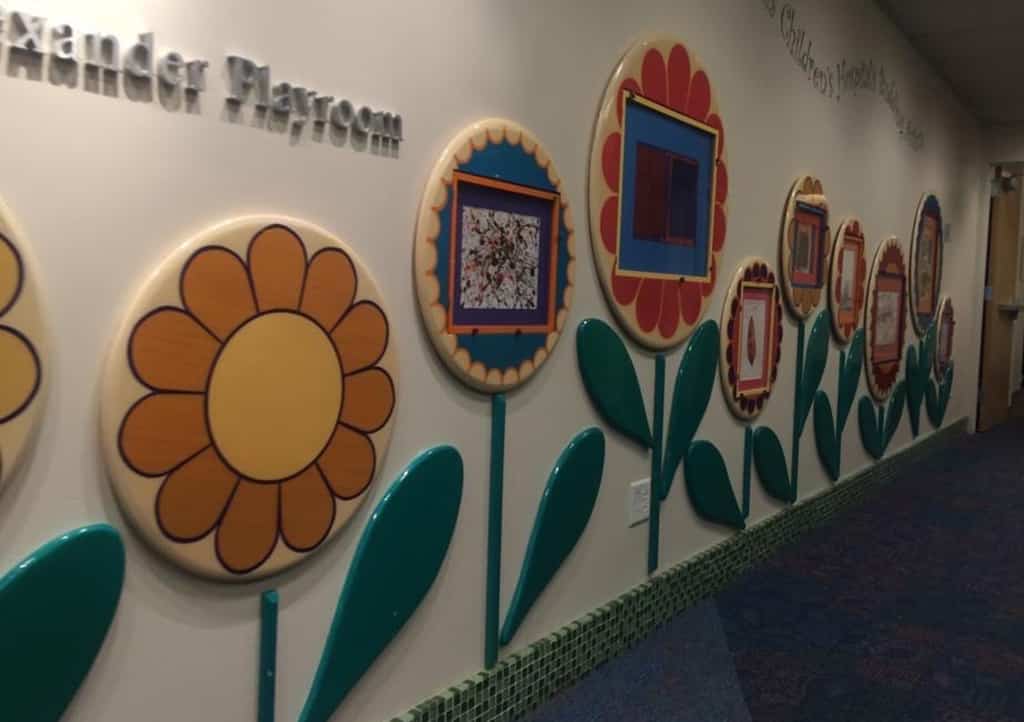 “I remember looking around and being like, ‘Wow, this place is so cool,’” she recalled.

It looked like this: A cafeteria so open and bright that it felt like it was outside. Colorful flooring with whimsical paths that brightened up the hospital’s hallways. Parking garage levels defined by animals and colors.

“At the time, I wasn’t like, ‘I want to design hospitals.’ But now that I’m an interior designer, I realize why I liked it. That cafeteria? It brought in biophilic design. As I’ve gotten older, I understand why it made me feel the way it did.”

Today, Meaghan is CIDA-accredited interior designer and the newest addition to Korte Interiors, a department within Korte Design. It’s important to her that people get the terms right.

“Interior decorator” is often used interchangeably with “interior designer,” but they’re not the same thing.

“Yeah, even my family still doesn’t fully get it. My grandpa always makes jokes like, ‘What kind of pillows did you pick out today, kid?’”

It makes her laugh, even though it’s not accurate.

“Interior decorating is just decorating. Interior designers study and understand human behavior —how spaces affect people mentally, emotionally and physically. So, I’m looking at all the acoustics ratings, the comfort level of furniture, the cleanability of the floors. Intelligent design handles all the aspects of the end users, not just what the client tells us.”

When designing a shopping center, for example, a client may aim to maximize the number of stores while Meaghan’s concern is public safety.

“So you have to balance that. Yes, we want lots of stores, but we also want open sight lines otherwise shoppers don’t feel safe and they’re not going to spend any money. And interior designers also think about the janitorial staff — how they’ll need plug-ins every so often, mop bucket sinks not just on every floor but in every wing.”

Every day at The Korte Company is different for Meaghan. Some involve selecting furniture, carpet, paint and flooring. Other days, she creates finishing boards for clients to preview the materials for textiles, toilet partitions and countertops.

She appreciates the variety, and she’s certainly learning a lot. Eventually, she’d like to design for healthcare, perhaps even lead a team or department dedicated to just that.

But right now, she’s game for anything that helps her learn and grow. And she always has been.

Turns out, just over 5 feet is tall enough 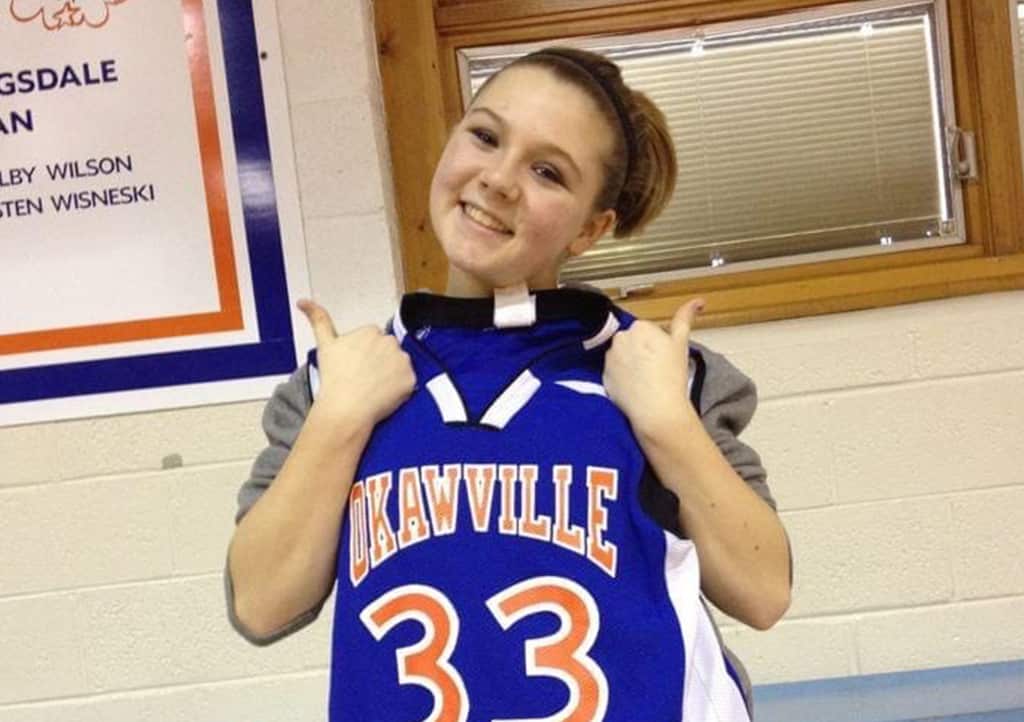 Like her family, Meaghan speaks with a soft, open-voweled drawl she can’t hear.

She does. It sounds like a two-syllable blend of “boats” and “bouts.”

This accent is typical of where she grew up: Okawville, a southern Illinois village of less than 1,500 people near the meandering Kaskaskia River.

“There was no stoplight. There’s not even a four-way — it’s a three-way. If I’d graduated from that high school, my class would’ve had 32 people.

Though she moved to Trenton, Illinois at 16, she still calls Okawville her hometown. It’s where she grew up. And it’s the place where she first fell in love with sports, when she was just a third-grader.

“I loved basketball, 100%. I went to all the high school games when I was a kid, I did Little Dribblers, and then once I got more into it, I was doing six or seven basketball camps every summer.”

Though she never grew taller than 5’1½”, she earned a position on the team year after year.

“I’ve never been able to touch the net. And you wouldn’t think I could block, but I could push people. I was a very aggressive basketball player. I understood all of the details of the sport.”

She attributes her athletic success to a keen spatial awareness and a unique talent for visualizing movement. And off the court, these qualities pulled her closer and closer to interior design.

After high school, she decided to major in interior design with a minor in construction management. Ever an overachiever, she arrived at Illinois State University having already completed most general education requirements. This meant starting in advanced junior- and senior-level courses. And to the plucky upstart, this was a kind of adversity she’d never experienced before.

During the second semester that first year, she enrolled in a 300-level design class taught by Professor Taneshia West Albert. The rigors of the course overwhelmed her.

“I spent at least once or twice a week in her office, super emotional and crying. But it was the best position I could have put myself in because I grew so much from that class and got so close with her.”

She didn’t know it at the time, but it was the start of one of the most important relationships of her young life: that of a student and a mentor.

“I call her my second mom. I’ve babysat her kids,” Meaghan said. “When I was finishing up my undergrad, she got a job offer from Auburn University in Alabama. And she said to me, ‘You’re going to grad school.’”

At the time, the idea seemed crazy to Meaghan because it was so far from home. But after six months of consideration, she decided to give it a shot. There, she pursued a degree in Consumer and Design Sciences with a commercial and healthcare focus.

“That was tough. I’m very, very close with my family and I was 10 hours away. So then not only was I down there trying to adjust to this new chapter, but everything got shut down. I had to work out of my apartment. It was a lot.”

She persevered despite these challenges and, ever the over-achiever, graduated a full year ahead of schedule. 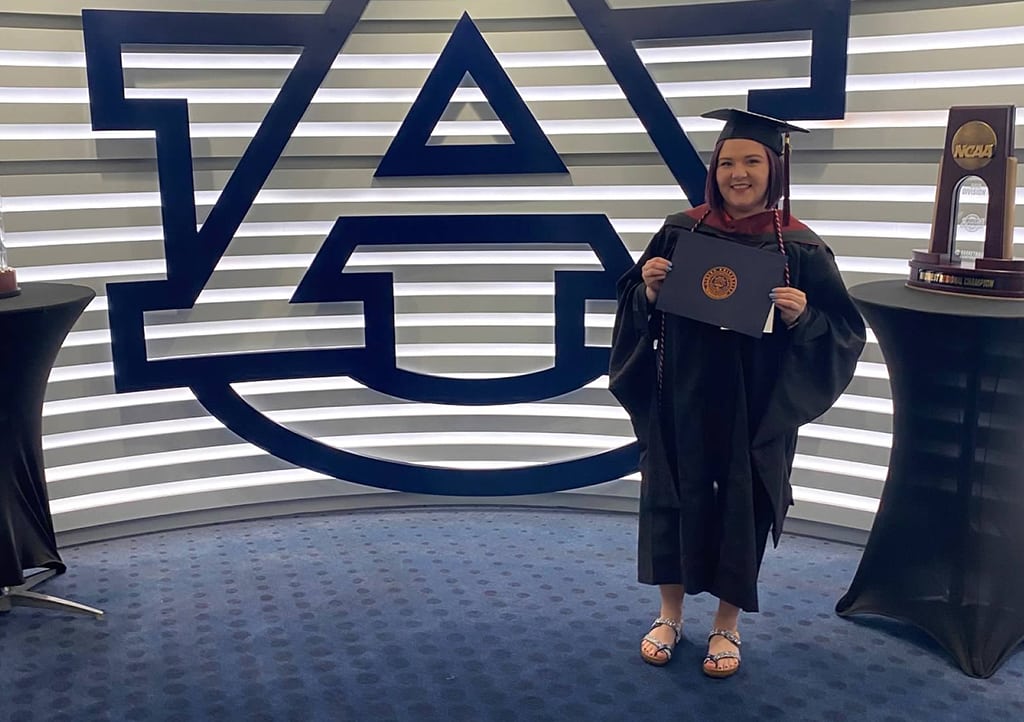 Meaghan joined The Korte Company as an intern in May 2021. By July, she became a full-time employee. She likes that it’s not the kind of place filled with suits. That means she can wear fun colors or striped paper bag pants if she wants.

Most of all, she likes that Korte’s the place where she always dreamed of landing.

And that’s no small statement.

After all, most little girls don’t fantasize about growing up to work in construction.

But Meaghan’s known about The Korte Company since childhood because her great uncle worked in the sales department from 1978 to 1985. In fact, shortly after Meaghan started, she bumped into Ralph Korte in the office hallway.

“It’s funny because when I said my name, he said, ‘I know some Daibers.’ And I said, ‘Well yeah, you actually knew my great uncle Leonard.’ He goes, ‘Oh my gosh, Lenny?!’ It was one of those cute things.”

That’s not the only cute thing about Meaghan’s current phase of life.

In October 2022, she’s marrying her longtime boyfriend, Dakota Fehrmann. He proposed to her surrounded by family at her parent’s lake house in Marion, Illinois. 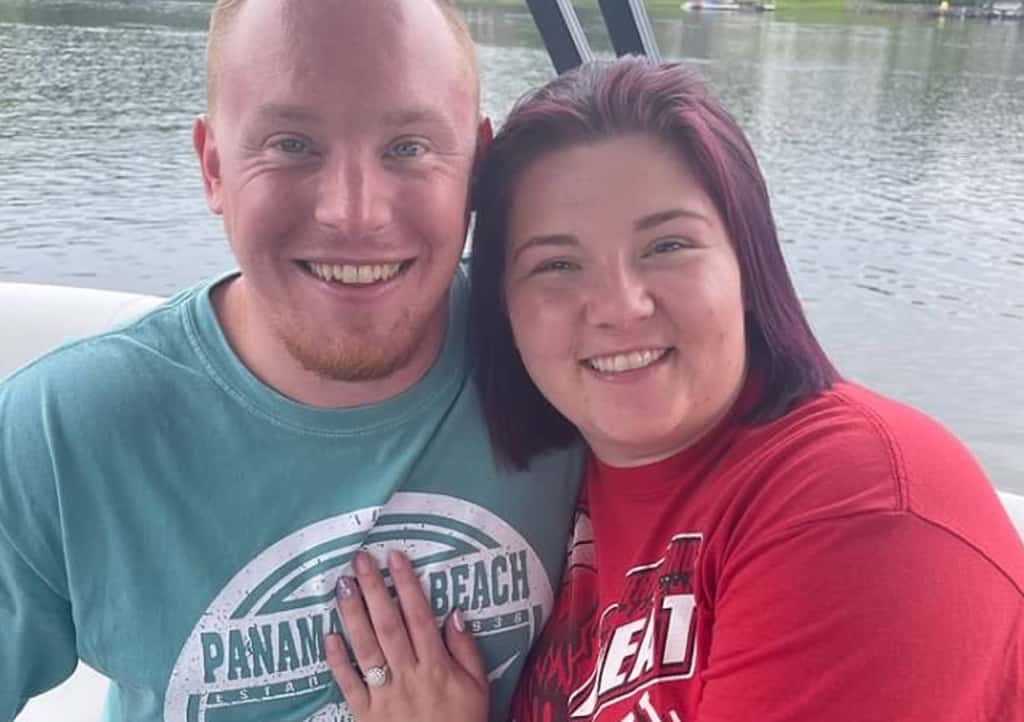 “That whole weekend was rainy and gross. Then there was finally a break, and I guess Dakota had told my mom, dad and sister that he wanted to propose on the boat. So they were like, ‘Okay, everybody on the boat!’ I was like, ‘What? It’s gross out!’”

Protesting, Meaghan changed into sweatpants and an old t-shirt and marched down to the boat. There, he dropped down to one knee and asked her to marry him.

Until the wedding, they’ll spend a lot of time with each other’s families, whether that’s jet-skiing and boating at the lake house or splashing around Dakota’s mom’s pool with their three nieces. Once a week, she cooks up hearty meals like lasagna or chili and they invite friends over to play Catan.

It’s an idyllic start to life for the young couple, complete with a floppy Goldendoodle named Otis and her budding career at her dream company.

“It was kind of always a hope that I would get in here because The Korte Company is so great. Once I realized I was going into interior design, I was like, ‘That would be the place to be.’”

And hopefully, now that she’s here, she can fulfill the design dreams that first took root in the Children’s Hospital, all those years ago. 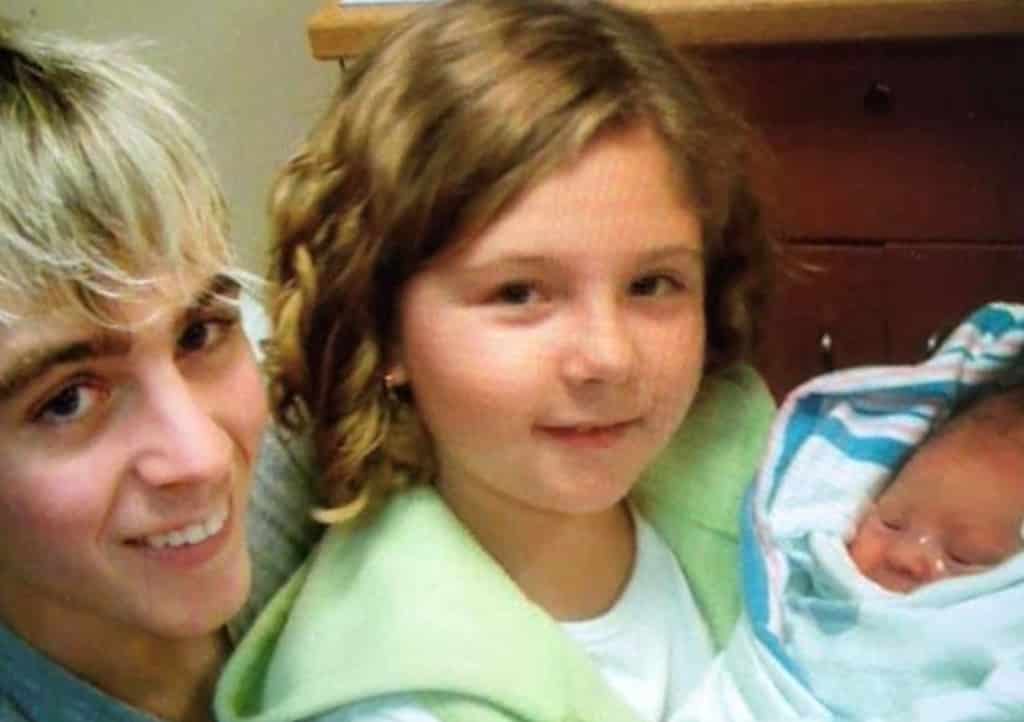 Someday, Meaghan wants to lead a team that focuses specifically on healthcare design.

While her early days in the children’s hospital planted the seed, it was a family tragedy that cemented her commitment to these spaces.

“My cousin Zach battled addiction from the time I was 13 up until 2018, when he passed away. One Christmas we actually spent in rehab. We brought a little tree and visited him so we could all be together for the holiday.”

At the time, she wasn’t thinking about the design aesthetics of a rehab center. But it’s an experience she can’t forget.

“It definitely shaped my research path. I’ve studied drug addiction since high school. That was something I always wished I could fix.”

When she was in college, she explored the issue in a project that focused on cultural addiction centers. She chose Colombia and cocaine.

“Cocaine actually eats away your sinus cavity. So people, after years of using and then being sober and drug-free, they’ll have reconstruction surgery on their sinus cavity.”

In response, she designed a rehab center to help people kick the addiction and pursue the associated surgeries needed for recovery.

“Addiction has always been something that has weighed very heavy on my heart. After learning the psychological side of design, I see how I can help.” 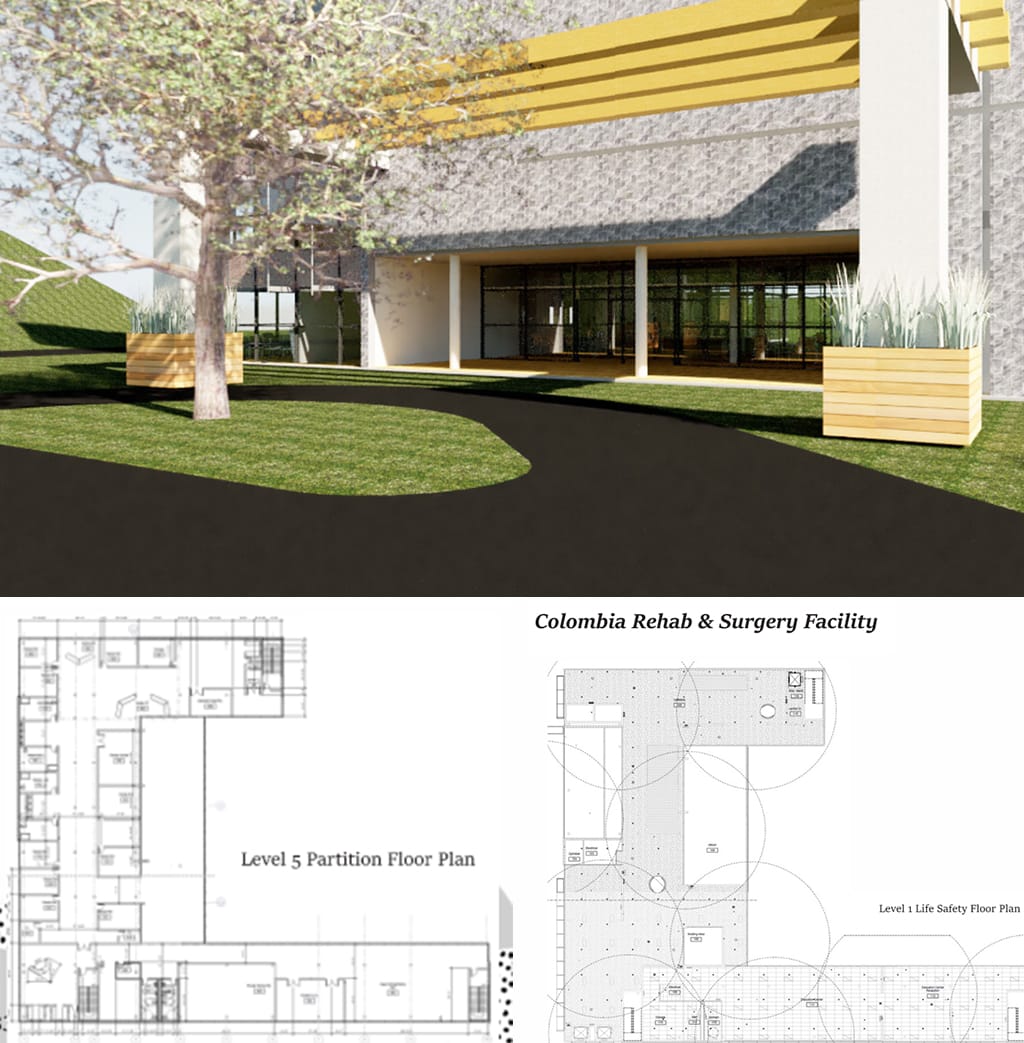 To Meaghan, designing for healthcare is a kind of wish fulfillment. She dreams up places that could have helped someone like her cousin. She’ll always remember him as the “goofy and cool older cousin” she adored. And though she couldn’t save him then, with any luck, her designs may help people like him in the future.

But Meaghan’s path isn’t defined by tragedy. Her interests go beyond rehabilitation facilities. Having grown up in rural Illinois, she’s passionate about rural healthcare, too.

According to Meaghan, a smart interior designer can help rural hospitals by designing for the equipment updates they’ll eventually need.

“A lot of rural hospitals have really old machines that don’t work well. They give unclear readings and people think, ‘Oh, rural healthcare doesn’t know what it’s doing,’” she said. “But it’s the equipment. And whenever it gets updated, there’s a good chance they’ll have to replace some flooring or take machines apart just to get it through the door. So a designer might say, ‘We need to take out this wall and adjust the size of this room,’ depending on the size of the new machine.”

Meaghan believes all public spaces benefit from interior designers. After all, they don’t just know regulatory principles — like doorway widths for ADA compliance — but they also understand the psychology of color, light and layout for efficient traffic flow.

At its core, understanding what people need and how to give it to them is the most crucial part of her job. And that comes down to one thing: empathy.

“You have to be the kind of person who can have deep conversations and pull things out. Your client doesn’t always know what they need — so the most important skill is being able to understand not just what the client tells you, but what you know they’ll need.”