Soldiers in fatigues stand at a safe distance.

On the porches rest boxes of food.

For months — in Houston and all over the U.S. — Army National Guard soldiers have been standing in for food bank volunteers ordered to shelter in place. The statement they make is almost as important as the deliveries:

You don’t have to worry where your next meal will come from. We’re here for you. And we’ll be back again. 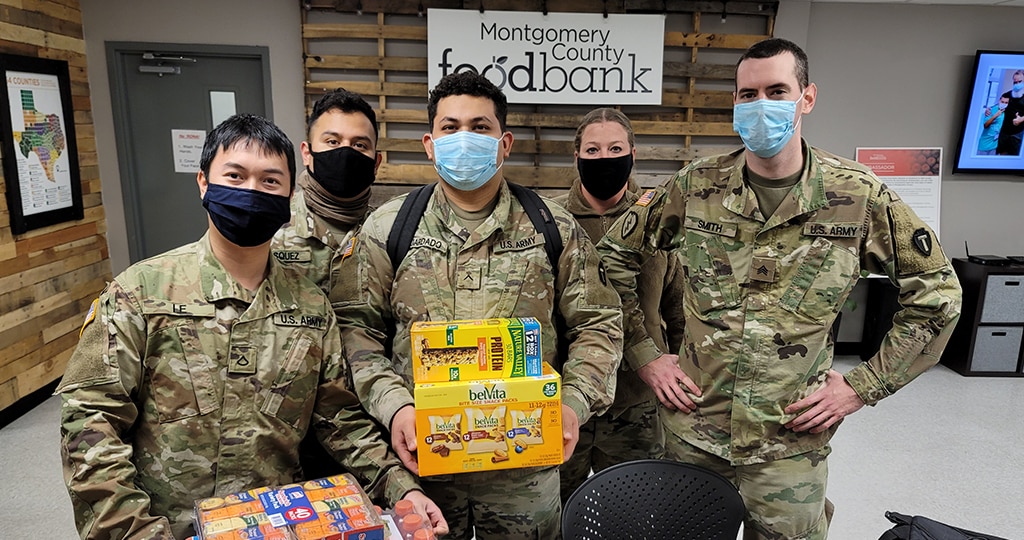 Stephen Tucker is one of those soldiers. He’s an estimator with The Korte Company who doubles as a First Lieutenant in the Guard.

He was on this mission because his orders said so. But Stephen’s the kind of guy who’d have volunteered for this.

His reason is simple.

“I love the United States of America.”

Stephen Tucker loves his country, but he was not born here.

He was born to American parents in Belgium. His mom was a teacher. His dad was studying music.

Active in their church, the expat Tuckers took a trip to Romania. It proved to be a life-changing journey. “They saw there was a need there. They just knew that’s where they needed to go,” Stephen said.

From his early childhood until graduating high school, Stephen lived in Cluj, in the Transylvania region.

“It’s in the northwest. Romania is shaped like a fish and if you look where the eye of the fish would be, that’s where Cluj is,” Stephen said.

The Tuckers took annual trips to the U.S. Stephen’s father’s family hails from Mississippi, and that’s where Stephen moved once he graduated high school.

He studied construction engineering and technology at Southern Miss. It’s where he met and married his wife, Kailey. It’s also where he decided to join the Mississippi Army National Guard.

“Even in high school I recognized about myself that I needed a little motivation, a little bit of a push to get myself going,” he said. “I thought, what better than joining the service? I really felt like I wanted to give back. I felt really blessed to be in this country. I love the United States of America.”

Stephen wasn’t the only Tucker to come to America. His brother and sisters did, too.

Stephen’s older sister Karis went to Southern Miss, too. After that she earned a master’s degree in Ohio before moving back to Europe. Today, she’s an opera singer in Berlin.

His brother John also moved to Mississippi after high school, and after attending community college there he joined the U.S. Navy. He spent several years stationed in Japan but now he’s in Norfolk, Virginia.

If you’re curious about all that music, you can blame Stephen’s father.

“It’s all because of him,” Stephen, who played guitar, said. “He plays piano and organ, and he sings and conducts. He’s very musically involved.”

Stephen misses Romania. He loved hiking in the Carpathian Mountains and beach days on the Black Sea coast.

“I haven’t been back there in seven years now. I miss it.”

A passion for building

“Back there” is where Stephen developed his passion for construction.

“As a young kid I wanted to be a truck driver because I really liked trucks, but after I grew up a bit I realized I had a passion for building things,” Stephen said. “I had a neighbor who was a home builder with whom I spent a lot of time doing music at church, and he is really the person who introduced me to the construction world.”

He brought that passion with him when he moved to the U.S., working construction during his college years.

“I worked at a small athletic field construction company as a manual laborer in Hattiesburg, Mississippi. I worked there for about three years and really enjoyed getting out and digging and building baseball, softball, football and intramural fields as well as tracks.”

Prior to that, he cut grass for a landscaping company. “There, I learned what work ethic and long days mean.” 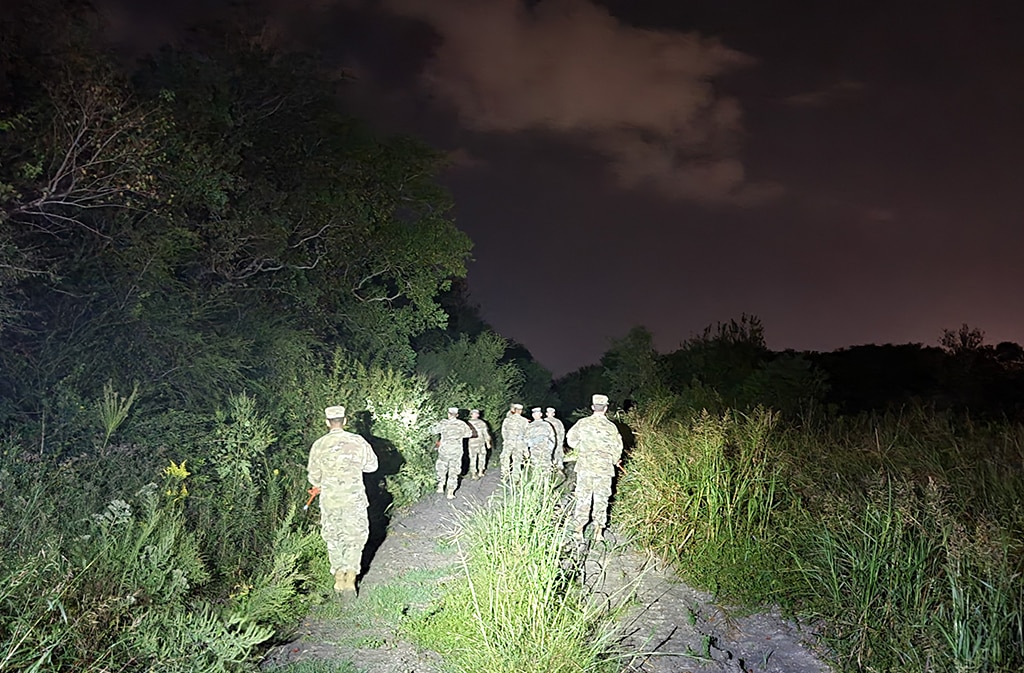 By 2018, as graduation approached, a new opportunity opened up. The Korte Company was hiring an estimator for its Houston office. He drove from Mississippi to Texas for the job interview.

“I was expecting a very formal setting, and shortly after sitting down, it started to feel like we were just talking about construction and how the Korte estimating department works,” Stephen said. “Best interview ever.”

Stephen landed the job, and following graduation, he and Kailey moved to The Woodlands. The Houston suburb is familiar territory for Kailey, who grew up there.

But just because Stephen’s career was beginning, it didn’t mean he was finished with his service. With graduation comes a commission as a second lieutenant. At that point, guardsmen can choose a concentration. There are dozens of options — infantry, field artillery, aviation, intelligence, to name a few — and Stephen chose engineering.

The National Guard boasts a flexible duty commitment of one weekend a month and two weeks per year. But in 2020, all that was out the window.

Stephen’s “normal” life was put on hold in May when he was assigned to a General Support Unit as part of the military’s pandemic relief mission. His mixed-discipline team of combat engineers, medics and Air Force airmen administered mobile COVID-19 tests in and around Houston, Texas in coordination with local authorities and the Texas Department of Emergency Management.

His team criss-crossed southeast Texas on a mission spanning dozens of towns — Brazoria, Baytown, Beaumont and others. In one two-month stretch, the team completed 4,225 tests. In that region alone, teams like Stephen’s tested over 70,000 patients. 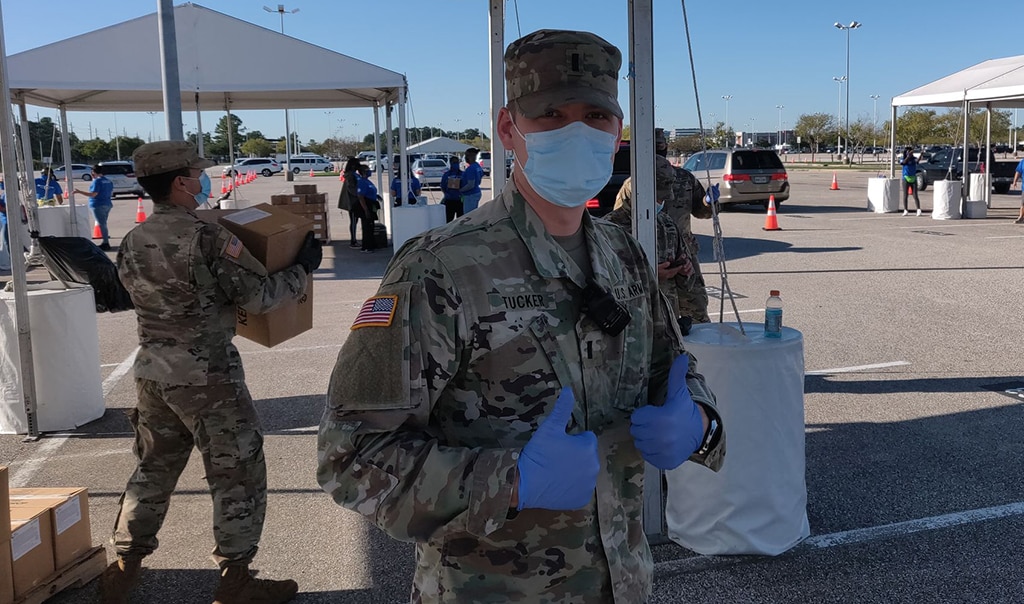 It was a high-risk mission. Owing to his constant exposure, Stephen contracted the virus himself in late July.

He’s young and healthy, but his was a rough case. His symptoms included body aches and chills and a stubborn 12-day fever. In all, the virus knocked him out for three weeks.

“If you look at all the symptoms for COVID, I had everything on the list. It was bad. I was sick for a long time,” Stephen said.

He recovered in time to receive new orders. The next assignment? Supporting food bank operations at home in Houston. The food bank was in dire need of help.

Prior to the pandemic, up to 800 volunteers would unload supplies and assemble pallets for local distribution each day. But the summertime surge of COVID infections drove most of those helpers into isolation. The new normal at the food bank was bleak.

“We’re here to supplement them on what they’re lacking,” Stephen said.

His new team spent three days a week in the warehouse receiving supplies and building pallets for distribution. The other two days, the team stood beside local volunteers to distribute food to families in need at NRG Stadium and at George Bush Intercontinental Airport.

They also made home deliveries. Local dealerships chipped in by turning lots full of vans and SUVs into delivery fleets. 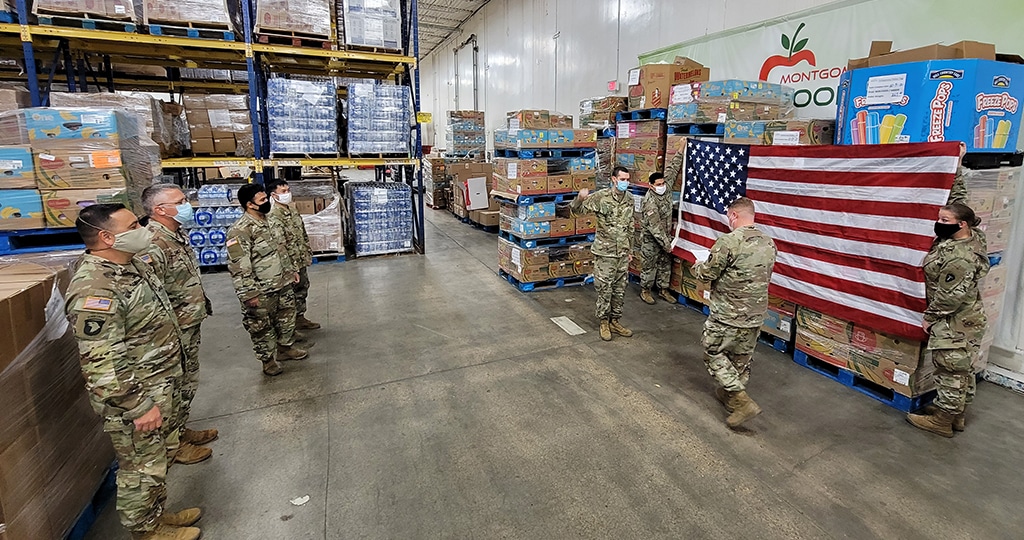 “Texans helping Texans,” Stephen said. “Between the warehouse and the distribution sites, it’s really nice to see how big of an impact it makes. Some of these people are in real need.”

That mission ended in December and Stephen eagerly returned to work, trading his combat boots for something steel-toed.

“My favorite jobs are the simulators and training centers, as well as entry control facilities,” he said. “I like these because they are very different from your usual commercial job, and I have been able to learn a lot about special construction trades that you would not otherwise come across.”

But the return to civilian life didn’t last.

Stephen was back in fatigues in January for the Army’s 25,000-troop presidential inauguration security mission in Washington, DC. Despite the prevailing political tension, Stephen and the soldiers in his command accomplished the mission without incident.

Then, in early February, he returned to Texas on orders to assist with vaccinations.

I filled in for my commander, a captain, because he was on COVID quarantine, and during that time I got introduced to the other commanders in the battalion,” Stephen said. “With 80 Soldiers under my command I oversaw the safe travel of all to Austin for in-processing, and then a sudden movement back to Houston right before the winter storm hit.”

Stephen was then put in command of an Army Mobile Vaccination Team. That mission began March 18, and to date he and his soldiers have administered 25,549 vaccine doses across 11 counties. 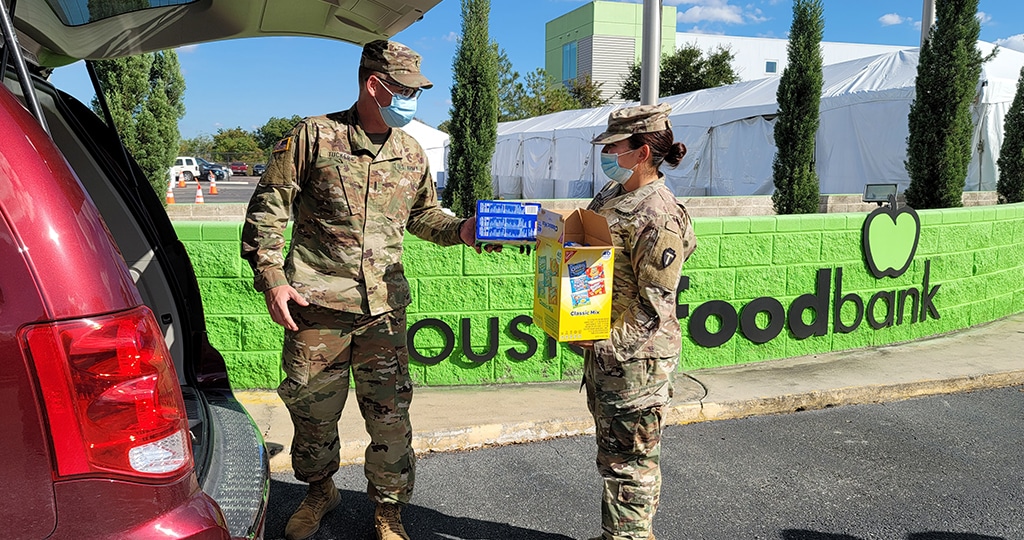 Stephen said it’s rare to serve on missions so close to home.

“This never happens. Never do you get sent on a National Guard mission and you’re in your own backyard. We just had our second baby last year so it’s been nice being closer to home.”

He continued: “I feel really blessed for the way The Korte Company has extended its support. Even the little things. They keep in touch with me. They sent me a card when my son was born.”

In 2020, the world called for help. It’s still calling today. It’s calling for people like Stephen Tucker, who doesn’t mind the sacrifice.

“Selfless service is one of the Army’s values, and it kind of ties in because my parents set aside everything they had and went to Romania,” he said.

The apple doesn’t fall far. Stephen has set his own life aside now for the better part of a year.

And if he must continue to put the mission ahead of himself, he will, and gladly.

Because Stephen Tucker loves his country.