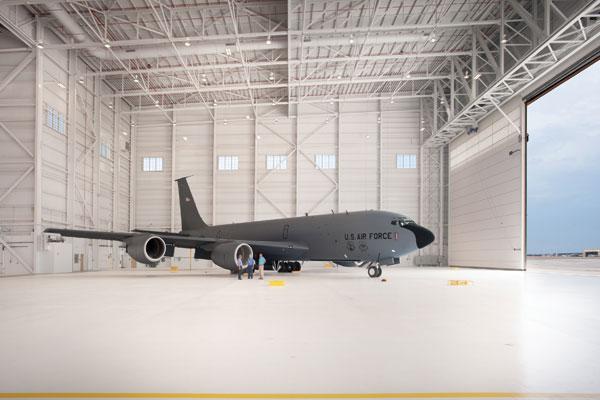 The Tinker Air Force Hangar we built is big. Really, really big. 164,000 square feet to be exact. The USGBC Certified Silver building’s perimeter measures 675 feet by 239 feet. Approximately 16,856 yards of concrete were poured, and that doesn’t even include the piers or structural components. Recycled material utilized on this project was just under 58 million pounds. You could put a couple of football fields inside if you wanted. And if you were especially industrious, you could put in a 3-story free standing office building which is exactly what we did.

The hangar has two giant doors. The multi-bay door measures 428 feet across and the single bay door measures 218 feet across (more on these later). On average the ceiling height is more than 100 feet tall. And to make sure everyone can see what they’re doing, there are 196 bay lights hanging from the ceiling. What sort of awesomely huge man-cave would be complete without a nice floor? Not this one. Over 1,600 gallons of epoxy cover every square inch of the interior. And to make sure it stays nice, we shot-steel blasted the floor to prep it. Twice. Hey, we like to keep a clean garage.

There was another hangar operating in close vicinity to our construction site. Utilities and electricity could not be disturbed, so we had to directionally bore a few hundred feet to place utilities. Gas, communications, industrial wastes were run through this boring. A lot of additional work. But as we say, the job is the boss. And the boss dictated this was the only way to get it done.

Inside the hangar, it’s a different story. It’s flat – flat as a pancake. In fact, the change in grade is only ½ of one percent. And that also holds true for the large entryway outside the hangar. As the large-body planes make their way into the hangar, it’s essential that the path they travel has a minimal grade change. Because these engines are so large, and they hang from the bottom of the wings, any fluctuation in grade over spec may cause the engines to drag, especially if there is any bounce in the wings as it’s being towed. To put this into perspective, think of a car pulling into a garage and bottoming out as it makes its way in from the street. Only the car is worth several hundred million dollars, and the bumper you just dragged along the pavement is a $10,000,000 Pratt & Whitney turbine engine. 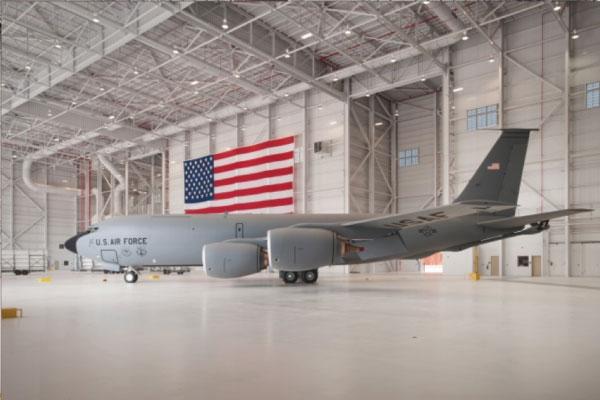 So what actually happens in the hangar

In short, a hangar is a garage for planes. When a plane comes in, sometimes workers will strip the paint, strip the wiring, and sometimes they even tear out structural components, depending on the maintenance schedule of the plane. Other maintenance items include a re-working of the hydraulics and landing gear. Basically, this is where large body planes come to get overhauled.

After they’re rebuilt, the planes are tested – for hours, literally. The planes are moved outside and fired up. Deflector shields are engaged, brakes applied and engines revved up. The noise is deafening. Ear protection is a must. The blast screen would get so hot that the zing coating melts off. And when the wind blows just right, the smell of jet fuel is thick enough that you could cut it with a knife. Once they pass all the tests, they get the green light for painting. Then they get tested again.

This is what we were working with.

Each concrete truck that was used on the job is capable of holding nine yards of concrete. That equates to approximately 1,872 trucks needed to pour this facility. There are ten tires per truck. That means 18,720 tires had to be cleaned prior to driving across the tarmac to prevent Foreign Object Debris, or FOD. When we say cleaned, we mean really cleaned. There was a full-time laborer who did this to ensure no rocks or other debris (FOD- foreign object debris) would make their way to the tarmac. 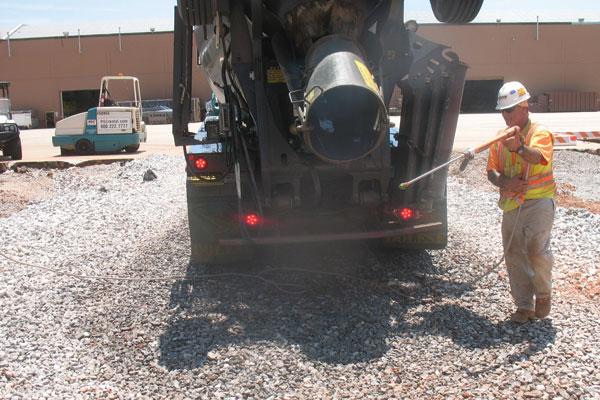 So, why all this cleaning? Simple. The engines on the planes are so big and the air intakes on some of them are so low to the ground that they will actually suck concrete / aggregate off the ground and pull it through the engine. Even a marble-sized piece may damage the engine. That ain’t gonna fly…

Our construction workers underwent an extensive Foreign Object Debris (FOD) training and an enforcement program was required to eliminate construction materials interfering with aircraft. A full-time employee used a street sweeper on and around the site daily. Each vehicle that entered or exited the site was checked for loose materials. Tires were checked top and bottom for anything lodged in the treads. Once inspected, these vehicles were escorted to the site. Constant cleaning was required to remove any material that could become FOD in the frequent high winds. Dumpsters were mechanically covered. Portable toilets were secured to the pavement and materials were anchored to prevent anything from blowing away.

And still, before any engine could fire, workers would go around with a half-ton pick-up pulling a giant magnet to remove all metal debris. A nail or a screwdriver would destroy the engine. A rag or a glove would also tear up an engine. All tools are checked in and out all day. All toolboxes have foam inserts, so at the end of the day, you place a given tool back into the foam inserts where it came from. No lost tools. Ever. And if an engine does fail due to FOD (foreign object debris), they will tear the engine down to see what did the damage. This is serious business.

At the Tinker Air Force Hangar, there are 94 concrete piers buried some 40 to 60 feet into the earth. Their job is to make sure the hangar doesn’t go anywhere. By all accounts, it should make it through the apocalypse, and then some. Each pier measures anywhere from 24 to 48 inches in diameter and is reinforced with miles of rebar. Then it’s filled with a specially formulated concrete mix for extra strength. 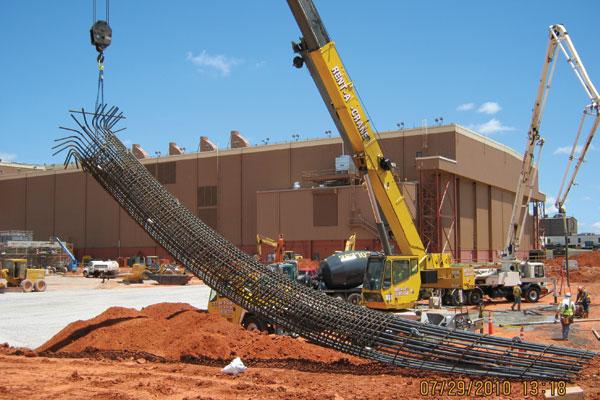 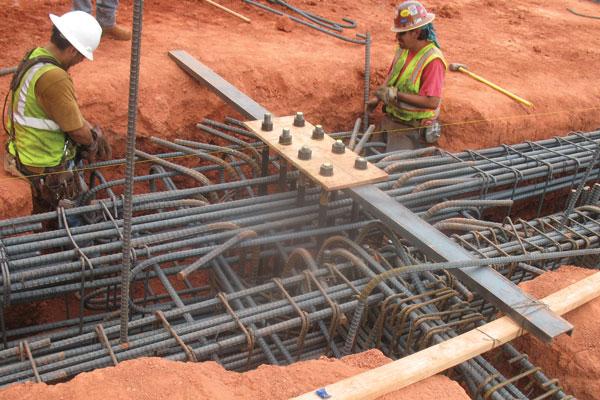 1.5 inches in diameter by 8 foot long, anchor bolts were buried into the piers. Each was heavy enough that it took two men to lift. We didn’t have to epoxy (fix/cut) a single one, which was pretty amazing because each of the columns had a base plate which ranged from 2 to 3 inches thick. There were on average, twelve bolts per base plate. The best part? Upon completion, we did not have a single one out of alignment. With that thick of a base plate, the anchor bolts can’t be out of plumb because you can’t just wiggle it to make it fit. With that thick of a base plate, there’s no play. 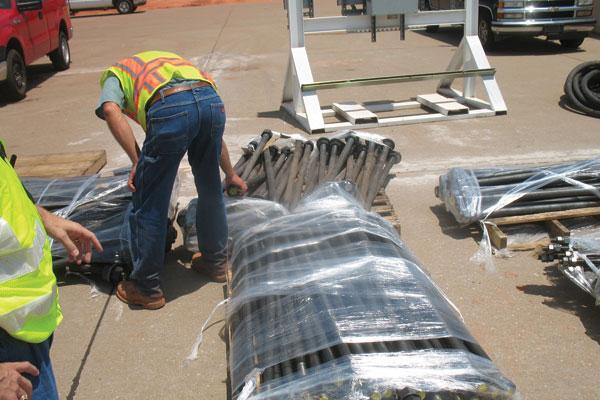 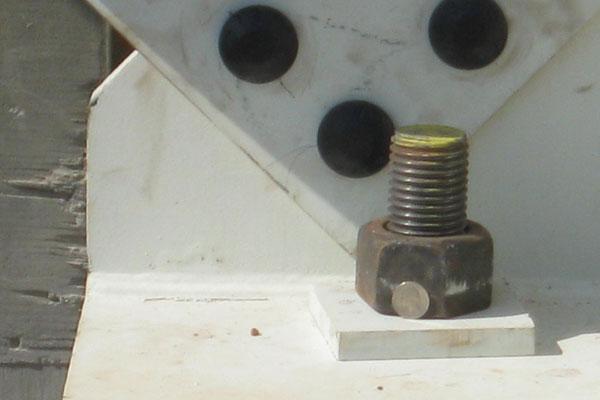 Under normal operation, the large body planes are brought into the hangar using a tug, sometimes called a tow. The tug delivers the plane to its resting spot. After bringing the plane to its final location, the tug continues driving and exits through the back roll-up door. 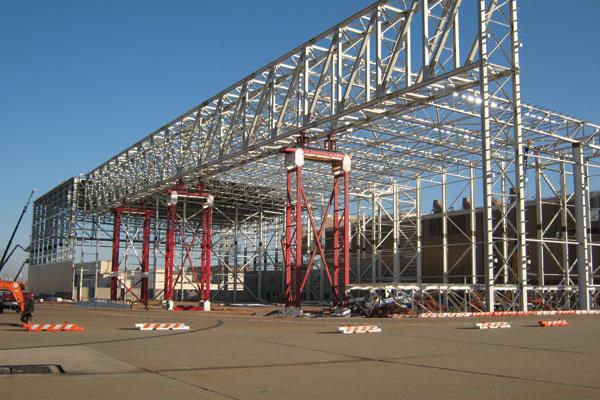 Three 80-foot structural bridges were used to lift the multi-bay hangar door-header into place. Because the header was so large, it was necessary to lift it in four pieces. You can see the bridges (red structures) in the picture above. In order to pull this off, three structural bridges or temporary piers standing 80 feet tall were erected. Basically, the first piece of the header was set to the existing stanchions and spanned to the first structural bridge. Then the second piece was lifted into place and spanned the distance between the first and second bridge. The third piece was lifted and set into place onto the second and third bridge. The final piece was then set and spanned from the third bridge to the other end of the existing stanchion. The temporary piers or bridges were shored up using lumber – basically a jack stand that could be raised or lowered as needed. In order to place the hangar door, the header, which spanned the entire length of the multi-bay door, had to be within a quarter inch. Now that’s some old school know how.

Surprisingly enough, the door itself does not weigh that much because it’s made of fabric (PVC coated polyester fabric). There’s an aluminum truss at the bottom section and six aluminum vertical mullions. For strength and stability, 80-foot aluminum spans run horizontally along the width of the door. The hangar door opens and closes much like a Venetian blind, using top mounted electric motors. As the door lowers, the fabric unfolds until it reaches the floor and is stretched tight by its own weight, effectively sealing the door along the bottom edge.

If you were to raise or lower the door completely, the process would take about four minutes. But if you need a place for your B-52 for the night, no worries. You’ll only need about 90 seconds to raise the door enough for the tail to clear.

At the end of the work day… 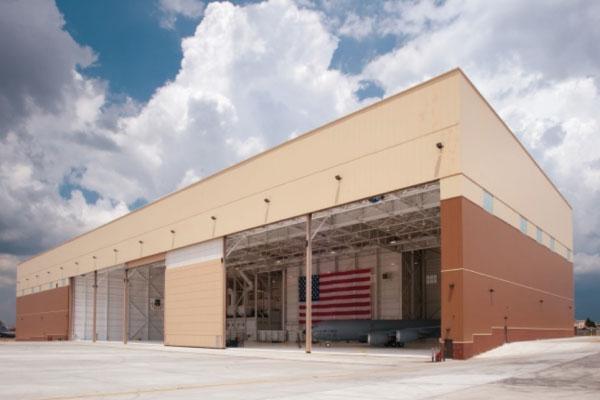 All utilities and support rooms are located along the east side of the hangar. This allows maximum use of tie-in locations and ease of future maintenance access. All mechanical equipment is located inside the facility providing for better life expectancy and ease of maintenance.  Both hangars are designed for a future 5-ton bridge crane, which will cover a minimum of 70% of the space. This allows for maximum use and flexibility of the bays. An open maintenance bay is provided off of the multi-aircraft bay and has provisions for a future 5-ton bridge crane.

It takes an army to run this place. And we’re proud and honored to have built for them. You can learn more about hangar construction on our market page.