But the story actually began a year or so earlier when the Wall Street Journal had secretly sent two men to the St. Louis region to scout possible sites for a new, experimental printing location within 30 minute drive of the downtown St. Louis Post Office. When they came upon a perfect, 12-acre lot in Highland, Illinois, they called the owner, and Ralph Korte picked up the phone.

They didn’t tell him they worked for the Wall Street Journal because the company was keeping the project under wraps. But one of the men, a fellow by the name of George Flynn, gave him a $20 deposit and his home phone number — a New Jersey number. It all happened so fast, Ralph didn’t believe it was real, so he called the number. When Flynn’s daughter picked up, he asked for a lumber company, and she said her dad worked for the Wall Street Journal. 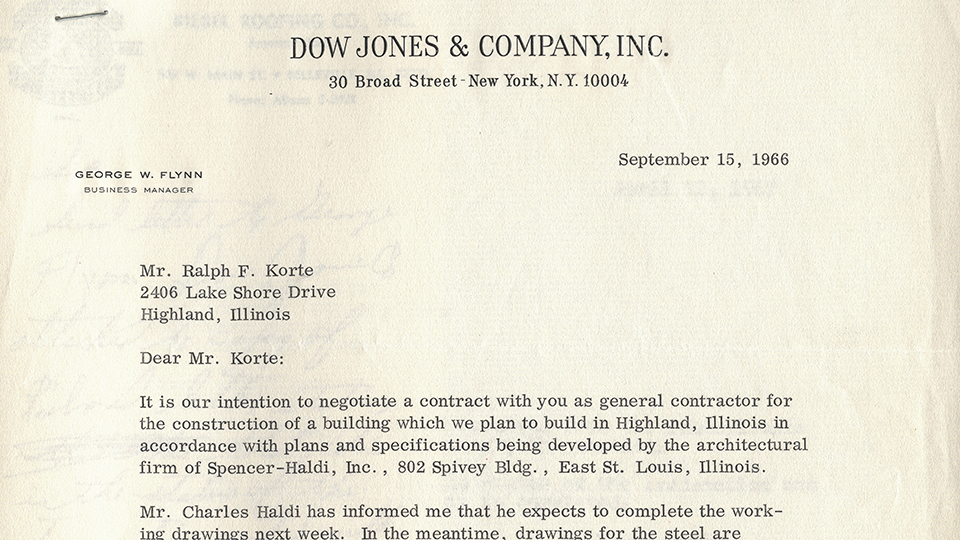 A short time later, the Wall Street Journal was headed to Highland.

Ralph Korte Construction Company built the new plant, and the Wall Street Journal was printed five nights a week and shipped it to the St. Louis and Southern Illinois areas. The plant provided improved service for Journal subscribers in the Midwest.