A detailed look at building the Nevada Joint Training Facility

And while the Nevada Joint Training Facility might look at first glance like just another big box and office combo in a neighborhood that’s full of them, the myriad unique features of this site and its surroundings made for a complex project indeed.

Add to that a firm deadline put in jeopardy by the onset of the COVID-19 pandemic, and our teams had their work cut out for them. 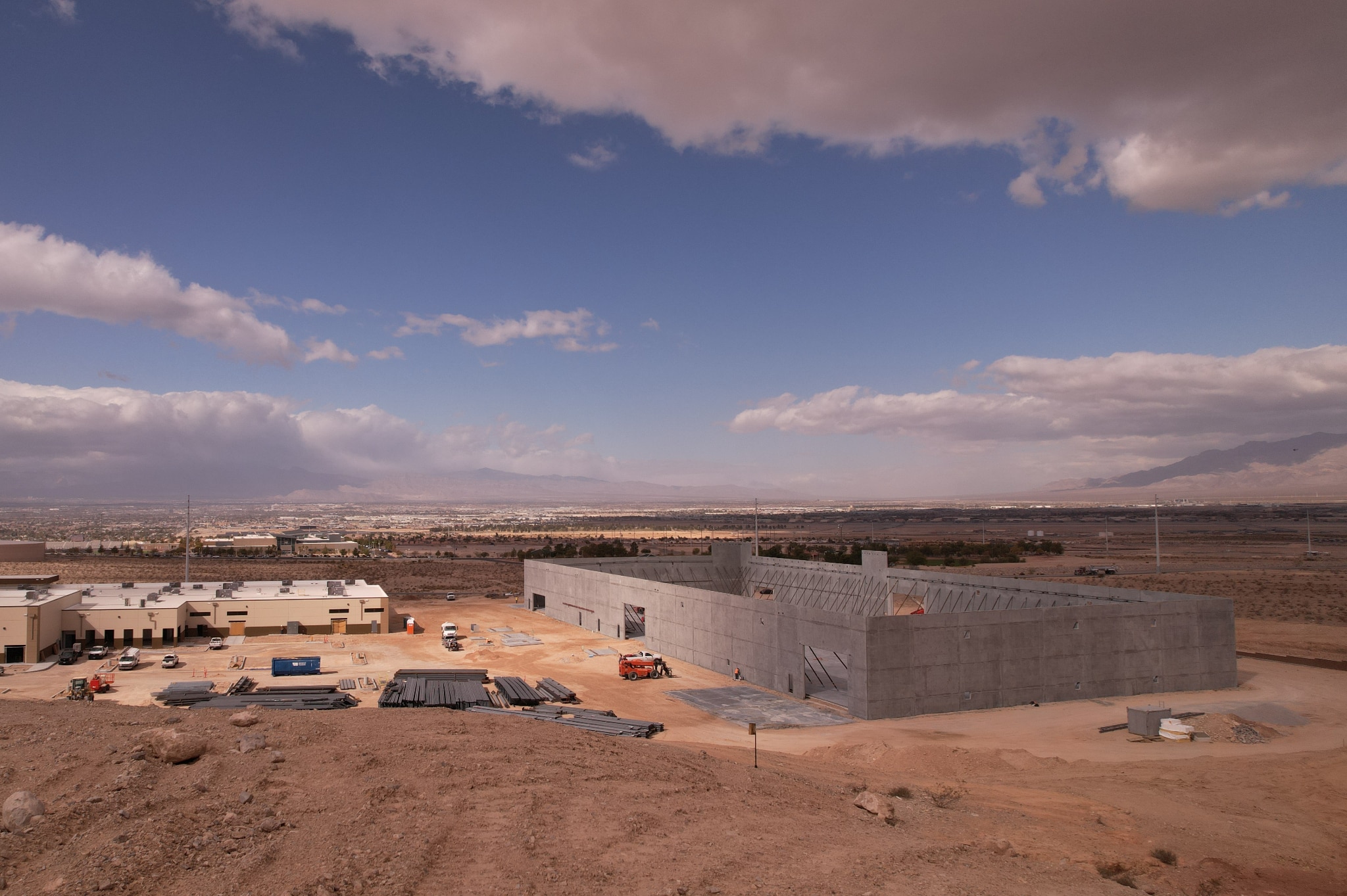 Multi-jurisdictional from day one

The Las Vegas Metropolitan Police Department is the official owner/operator of the facility, but they’re far from the only ones using it.

In this major metro, multi-jurisdictional cooperation is essential to effective law enforcement. And while the new facility was already in planning stages by the time a shooter opened fire above the Strip on Oct. 1, 2017, that event offered grim proof of the need for more a unified emergency response.

In addition to the LVMP, facility users include:

But before those agencies ever stepped foot in their new digs, our pre-construction team needed to untangle some complex bureaucracy.

Bureau of Land Management – This federal agency owns the land where this facility is located. Here’s the quirk: federal law prohibits the removal of minerals from land the BLM owns. That meant that the soil and rock we excavated in preparation of laying the foundations had to be deposited and re-graded on site.

Clark County and the City of North Las Vegas – The site is located within the North Las Vegas city limits, which is within Clark County. And while BLM owns the land, North Las Vegas acts as its steward under the terms of an agreement with the U.S. Department of the Interior. In addition to following the federal rules noted above, we also were required to submit construction plans to the county and city for review and comment.

Las Vegas Metropolitan Police Department – Remember, they’re the customer here. They are allowed to occupy this site (outside their city limits) under the terms of a lease agreement with North Las Vegas.

LVMPD Foundation – This non-profit raises funds that supplement police department programs. As the project’s developer, they raised and held the funds as well as managed expenses for this construction project.

Federal Aviation Administration – The construction site is next door to Nellis Air Force Base. The most sophisticated combat aircraft ever built take off and land there around the clock, so keeping the airspace free and clear is essential. We utilized Tilt-Up concrete construction for parts of this project, and that meant erecting tall cranes that hoisted the panels in place. We needed to coordinate with the FAA and the base to ensure there was no risk that our equipment would interfere with any flight patterns.

That’s a lot of stakeholders, and our groundwork could not begin until each and every one signed off.

This would have been challenging even in normal circumstances, but this was early 2020. The project was about to become anything but normal.

Same as in other major cities, the COVID-19 pandemic ground Las Vegas to a halt.

While that slowdown ended up being somewhat fortunate for our crews renovating the El Cortez Hotel & Casino across town, it caused major challenges at a critical early stage of this project.

For one thing, global lockdowns put the brakes on the supply chains we rely on to get materials to job sites. Lead times of a few days stretched into weeks or months. In fact, a delay in the delivery of roll-up doors left the structure vulnerable to burglars who visited the site a few times before surveillance cameras were installed.

For another, lockdowns at the local level severely constricted the availability of subcontractor labor. The combination of creative project phasing and our strong relationships with local subs blunted the impact.

Finally, the pandemic also resulted in civil employees of all stripes to be sent to work from home. It happened at the worst time: With the offices responsible for issuing permits working at greatly reduced capacity, there was little to do other than wait to get the green light on certain aspects of the work.

Throughout it all, the LVMPD remained committed to taking delivery of the new facility on its original timeline. That meant we had to buckle down and get the job done, no matter what.

After all, The Job is The Boss.

Thankfully, we were prepared to deliver under this increased pressure.

First, the advance planning we undertook with local subcontractors paid off. We needed them involved earlier on in the process than is ordinary because the facility contains several complex features and systems. We knew they could offer valuable design-assist insights to our architects and engineers. This up-front legwork meant all parties were on the same page and prepared to react to challenges from the start.

Second, our teams had no trouble adjusting to the new normal of remote work. As a national builder with simultaneous projects underway from coast to coast, we’d already been conducting Zoom meetings and sharing digital drawings, renderings and images over the cloud for quite a while. The world’s transition to a tech-forward workflow didn’t faze us at all.

For a site at the desolate edge of the desert, there sure were a lot of challenges our teams needed to overcome during construction.

Aside from those fighter jets, we contended with high-distribution transmission lines that run through the facility’s property. That meant we needed to coordinate closely with Nevada Energy to meet electrical grounding requirements, preserve 24/7 maintenance access to the lines and pylons, and meet their guidelines for pylon retaining walls. 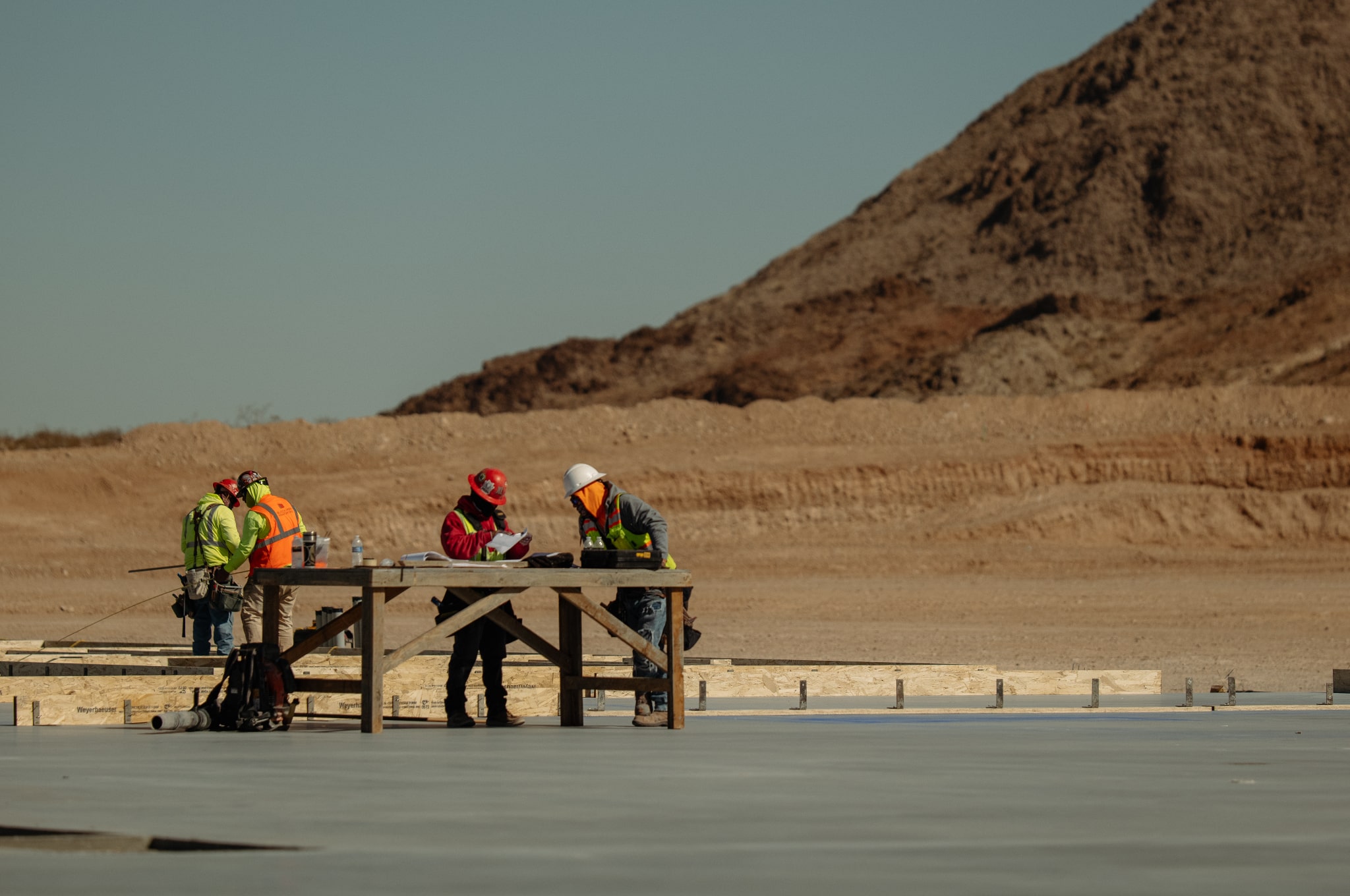 Underground, the new facility’s water lines needed to be tapped into old municipal mains first built in the 1970s. The problem was, old drawings did not provide accurate shutoff valve locations. And even once those were located, the city forbade shutting off service during the day. So, working only at night, we built a bypass to maintain water service to nearby businesses and homes while we tapped into the mains.

And even deeper down is a fault line. Three seismic refraction tomography (SRT) surveys were conducted to calculate what effects an earthquake might have on the facility. The results helped our engineers and architects design a facility with geophysical resilience in mind.

There’s not another facility like it in the U.S. The Nevada Joint Training Facility consists of two buildings so far. Building A, which is complete, includes:

Building B remains in progress, but inside it will be:

Another unique aspect of Building B will be the carbon dioxide, nitrogen dioxide and methane detection systems. These are necessary since vehicles will drive through the space; when concentrations of their exhausts get too high, sensors will automatically trigger high-volume air handling to safely vent the harmful gases outdoors and replace them with fresh air.

Las Vegas Strong, and getting stronger

To us, Las Vegas is home. And the “Las Vegas Strong” mentality has permeated this city and its people despite several hard knocks in recent years.

But the thing about Las Vegas is, you can never keep it down. It always stands tall.

And now that the Nevada Joint Training Facility is almost complete, this special community provides elite-level training for the guardians who always have our backs.