Danny Ellis’ fingerprints are all over Las Vegas.

“I can literally go 10 minutes in any direction in town and say, ‘I’ve worked over here, or over there and over there,’” he said.

Sometimes his impact was small, like replacing door handles or framing recessed paper towel dispensers. At other sites, he helped complete pools and community centers. He did seven projects for HCA Healthcare, the city’s largest hospital system. And he worked on a bunch of Albertsons grocery stores, where he’s particularly proud of how clean his arches still look, years later.

After 20 years in the industry, he’s done so many jobs he can’t remember them all. And though he didn’t realize it at the time, each one propelled his career forward, bringing him closer and closer to The Korte Company.

Danny’s lived in Las Vegas for over two decades and he loves it.

But in his off-hours, he also likes getting out of the city. It’s how he clears his head.

He especially loves taking his two kids and the family dog, a playful Belgian Malinois named Dasha, to their cabin up north. It’s in the rugged mountains that straddle the border between Nevada and Utah. From their perch at 7,000 feet, they can even see the Milky Way. 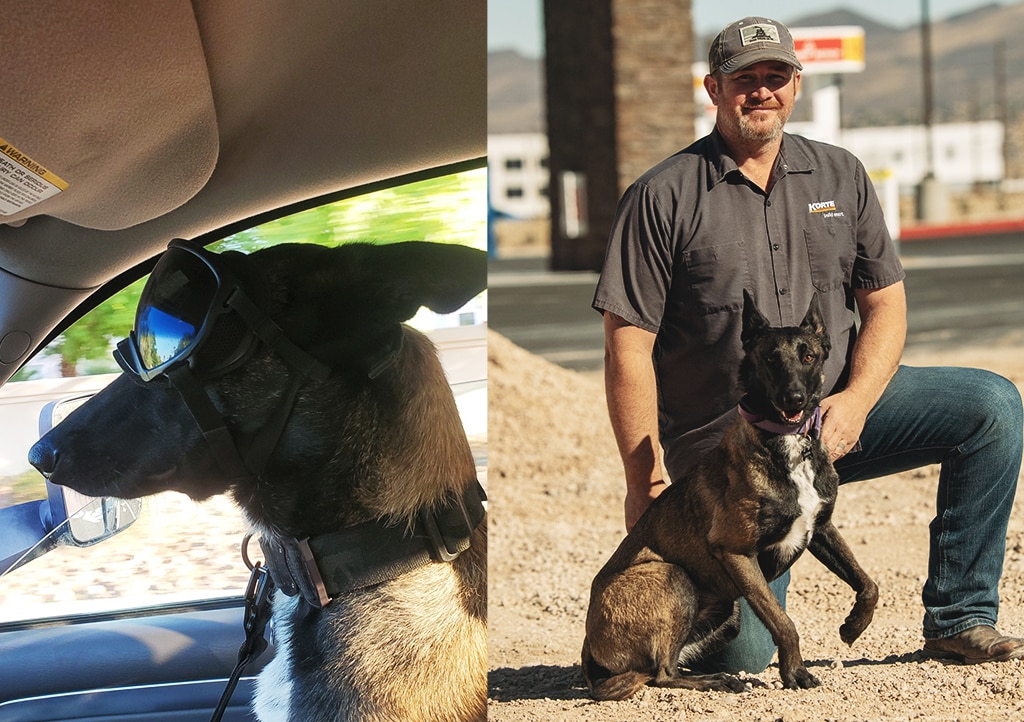 “We look at the stars a lot,” he said. “I usually leave with my neck hurting because I’m looking up so much.”

And even though their mountain cabin is far from where Danny was raised, that seclusion stirs up a sweet nostalgia for childhood. It almost feels like the place he once called home.

Salt of the earth

Danny grew up in Seminole County, smack dab in the middle of Oklahoma. Its northern boundary parallels the I-40 interstate. The winding Canadian River cuts its southern border. This sprawling country is most famed for an oil boom in the 1920s. Today, it’s dotted by tiny towns with names like Bowlegs and Little. It sounds idyllic and it was — rural America, through and through.

His family ran Hereford cattle on their farm, and his grandparents lived just around the corner, breeding and raising quarter horses. Typical chores involved hauling hay, mending fences and counting the herd. He also built a barn and garage for the family. For fun, he tinkered on hot rods with his father and uncle.

It was a peaceful, quiet upbringing that hinged on hard work. As a teenager, he also held down two jobs — one at the auto salvage yard and another at the Catfish Round Up diner, serving fried fish and hush puppies.

His graduating class had just 23 kids. After high school, he attended college on a baseball scholarship, where he pursued Recreation Management. Back then, he figured he’d grow up and become a game warden.

But after two years, he followed a girlfriend to Las Vegas on a whim.

At the time, it was the biggest, most bustling city he’d ever seen. There were palm trees and mountains, and the famed neon lights. And businesses didn’t just stay open late — they never closed.

“It was awesome. It was completely different. A culture shock,” Danny recalled. “And everything was available. Everything.”

The relationship that drew him to Nevada ended, but his love for Sin City endured. Sure, it was a big change from Oklahoma. And sometimes he still misses the green, the seasons, the drama of storms rolling across the prairie. He misses fishing. He visits his folks and the farm once a year. 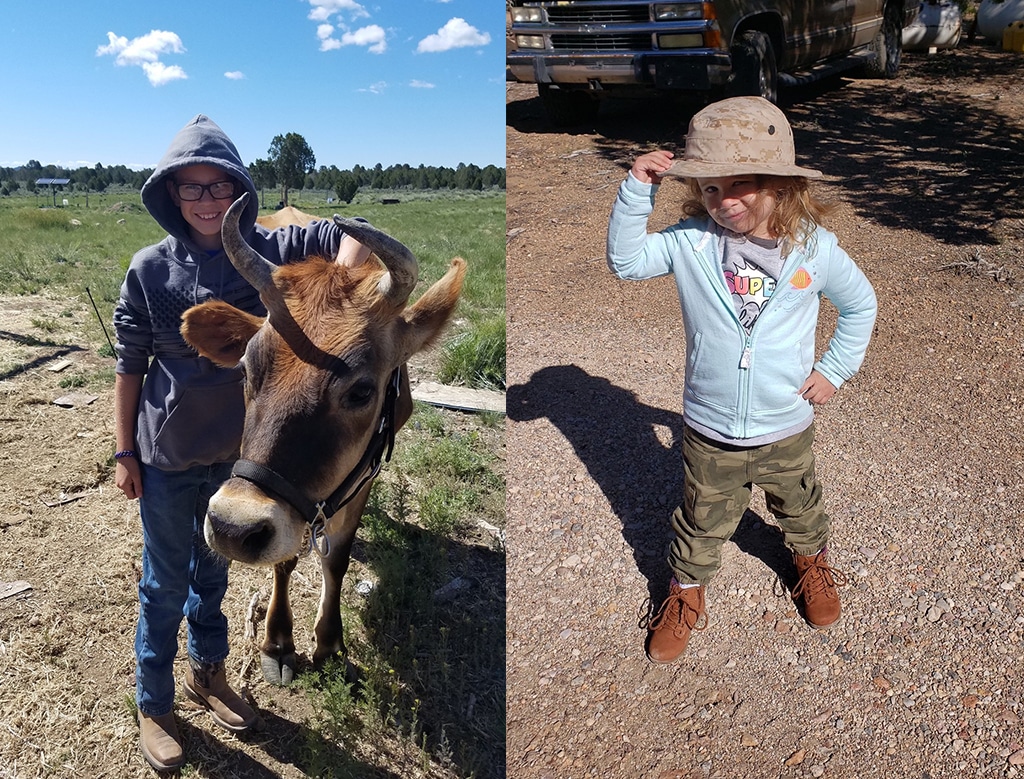 But Las Vegas is home now.

Rather than finishing his degree that first year in town, a friend of a friend introduced him to the owner of a small company called Hardy Painting & Drywall.

Danny knew how to swing a hammer, drive a nail. Surely, he figured, construction would be easy to pick up. It was. They hired him on the spot, then put him through a four-year apprenticeship program with Associated Builders and Contractors (ABC).

Over the next 14 years, he learned every field aspect of the industry: building acoustic ceilings, hanging drywall, framing structures, installing doors and windows and more. Later, his roofing skills drew him to jobs across the West, including massive data campuses in Quincy, Washington. Eventually, he moved into concrete, pouring midnight jobs for everything from tilt-up walls to solar farm foundations.

Despite the blistering summers and the chilly winters, Vegas never lost its appeal.

He was there to stay.

Danny didn’t know it yet, but the wheels toward his next life stage started turning in 2014. In retrospect, he could feel it coming. He felt “maxed out” with Hardy, though they’d been good to him.

“I was going to work every day, I was making money, I was working with people I liked. But I could do it with my eyes closed. It was a dead end,” he said.

That year, his company won a bid for Touchstone Living, subcontracting for The Korte Company to frame a main headquarters for the private home developer.

Danny still doesn’t know quite how it happened, but somehow, he caught the attention of the Korte project supervisor, who passed his name along to Greg Korte. Soon after, that superintendent told Danny to write up a resume. And then he said, “We’d like to offer you a position.”

It was a jarring proposal for Danny. Up until that point, every other job he’d ever held had loose gatekeepers, people who simply said, “You want to work here? No problem.” Even in construction, he’d always been told to just show up with his toolbelt.

But in his first face-to-face with Greg, they actually sat down and reviewed paperwork. They talked about insurance programs and retirement planning. They even discussed tuition reimbursement, if Danny ever decided to go back to school and finish his degree.

“It was a real interview. I was like, ‘Man, this is… weird. I’ve never had a real job interview.’ I’d always been told to just go to work. Greg just laughed when I told him that,” Danny recalled. “It was a right place, right time kind of thing.”

The Korte Company hired Danny as a superintendent in December 2014. His very first job was a double project for HCA, building a call center and a suite of executive offices.

Fast forward to today. His old boss at Hardy reports to him. It’s a big step up from the days when he was the one wearing a tool belt. And he’s up for the challenge.

“I think a lot of people think project superintendents are just glorified babysitters, but there’s a lot more to it,” Danny said. “There’s a lot of chin scratching.”

The general duty of a project superintendent is to monitor a job site. But every project has different demands. On any given day, Danny isn’t just making sure a building’s going up. He also coordinates with various subcontractors, tracks the pace of work, enforces proper safety precautions and coordinates inspections. He’s in constant communication with project managers, offering status updates from the job site and subcontractor evaluations.

He also loves the pace. Construction in Las Vegas tends to move a lot faster than other places because there’s so much money on the line. Lately, his schedule is loaded with PKWY Taverns, a local gastro-pub chain that blends gaming with interactive technology.

“We overcame a lot of difficulties with this latest PKWY Tavern that I just finished,” he said. “We actually got a letter from the developer thanking us and talking about how well our team worked together, and there was no conflicts with anyone. This tavern and the site work, that’s probably the largest job I’ve done.”

Danny didn’t just oversee the construction of the restaurant’s 6,000-square-foot building, but its exterior dining area and the sitework for the development as well. He also organized the utilities install for an on-site gas station developer that shared the site.

In Vegas, time is truly money. Every delay that prevents an opening means lost earnings for an owner, especially in the bar and restaurant industry.

“Sometimes they give us a job and say, ‘This is the date we have to be completed.’ I’m like, ‘How is that possible?!’”

But ensuring those outcomes by keeping a project moving along is exactly Danny’s job. And once finished, he loves the satisfaction of seeing those buildings.

“I just like looking at the things I’ve helped create. And at Korte, they’re not shy about saying, ‘Good job,’ and ‘Looks great,’ and ‘Thanks for all you’re doing.’ It’s nice to hear.”

Right now, Danny is just 41, making him the youngest Las Vegas project superintendent at The Korte Company. He’s been thinking a lot about what he hopes his future holds, and he knows one thing for sure: He wants to stay in the field and keep learning new things.

“I’m not an office guy,” he said. “I want to be on a very large ground-up project with a well-seasoned superintendent. Most of the guys are in their 50s, 60s, and they know all the tricks. So I’m trying to learn from their experience.”

“I like talking to him because he’s always like, ‘Hey kid!’ He could be my grandpa. And he’s a nice guy, and we drive similar trucks. We always talk about vehicles — we talk about all kinds of stuff. I call him a lot. One of the reasons that I really enjoy working with Korte is because everybody’s so helpful.”

So many people have helped Danny over the years. He keeps a roster of construction experts on his speed dial, with specialties from parking lots to underground work. Sometimes his questions are as simple as, ‘What do I need to do here?’

“Every superintendent with Korte is very helpful. I call them left and right,” he said.

Danny’s not afraid to ask for help. After all, that’s how you learn.

You can take the man out of Oklahoma…

Danny is the kind of project superintendent who constantly asks crews if they’re drinking enough water, especially during the hottest months of the year. He cares about the people on his job sites because he used to be one of them. He knows exactly how it feels.

He’s described himself as the opposite of a micromanager. And if something goes wrong, he’ll just say, “’It’s okay. We’ll fix it.’ There’s multiple ways to get a job finished. I’m not the guy that yells and screams, ‘You’re not doing it right!’”

To Danny, bad project superintendents act like nitpicky drill sergeants. Or worse, they’re just lazy and never leave their air-conditioned project trailers. He knows from experience that neither of these habits motivate a team. So he walks around. He pitches in as needed. And sometimes he’ll even go out of his way to pick up a bunch of donuts from Pinkbox.

These are small-town gestures from a small-town man at heart. It’s his unshakeable values and easy spirit that make him great at what he does.

“I’ve been told by so many people, ‘You’re so patient. You’re too patient,’” he said. “I don’t let things really get me worked up.”

That’s just the Oklahoman in him. 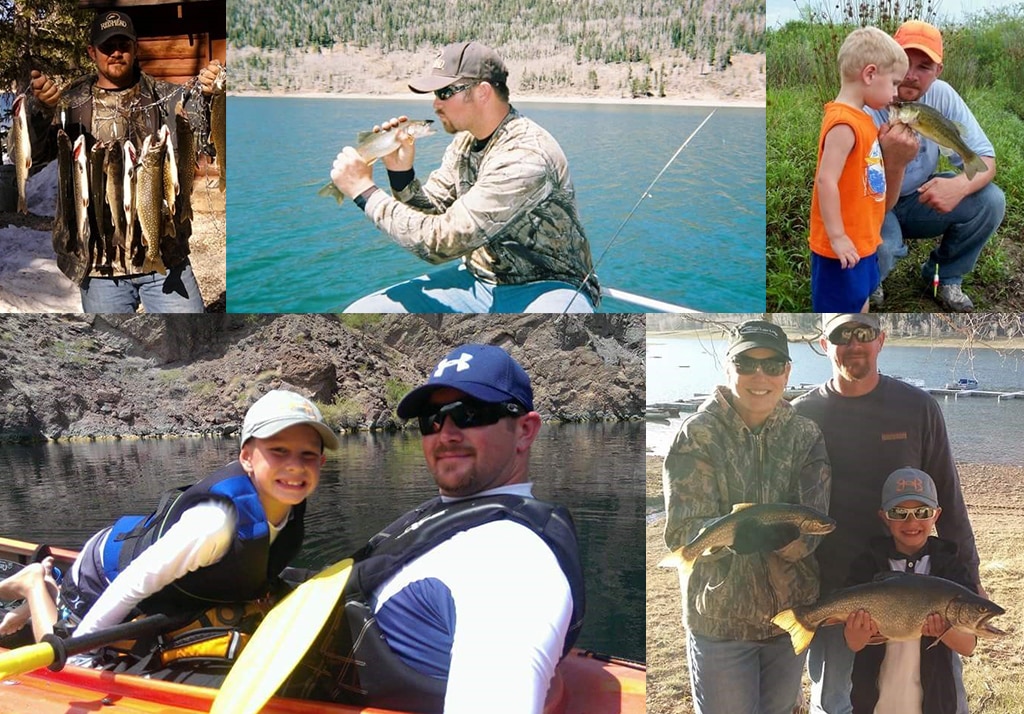 “The way I was raised, it was a laid-back way of living. It was never rush, rush. I don’t get stressed out.”

All this to say, you can take the man out of Oklahoma and drop him on the Las Vegas Strip.

But you can’t take the Oklahoma out of the man.

And Las Vegas is better for it.