From fully integrated Design-Build new hangar construction projects to facility expansions and renovations, there are a number of fundamental design and construction elements critical to the successful delivery of a hangar project. At first glance, hangars appear to be fairly straightforward – nothing more than a large spanning space to store and repair aircraft. Truth is, there’s much more to it.

Aircraft hangars ultimately house some of the most sophisticated machinery built by man, especially when the client is the United States Military. Some aircraft hangar design projects are complicated by their sheer scale, while others are defined by the conditions surrounding the job-site.

Each aircraft hangar is unique. That said, we’ve designed and constructed more than a few and over the years, we’ve identified a number of common themes.

Foreign object debris (FOD) has a tendency to become foreign object damage if not properly controlled. Scratch that. FOD will lead to foreign object damage if the accumulation of small rocks and other debris is not meticulously guarded against throughout every phase of the construction process. Surrounding working airfields and runways experience a large volume of aircraft traffic with large, low-to-the-ground engines with air intakes powerful enough to suck concrete and other aggregate from the ground and into the engine. Inside the hangar, engines are sometimes tested for hours at a time, requiring interior spaces to be kept completely free from all debris as well. And that includes every single part, tool, and attachment. Considering that the contractor is directly responsible for any damage stemming from FOD, a containment strategy is a step worth taking.

2. Making the most of available square footage

In all our years of building, we have yet to come across a project where we’ve had to figure out what to do with all the extra square footage. Truth is, square footage is a precious commodity, and using it to its fullest is the driving force behind any successful project.

Regardless of the overall size of the hangar, space is critical. And maximizing that space is a product of the design team working closely with the owner as well as the mechanical and maintenance crews who procure and service the aircraft. This is especially important in establishing an efficient work space and optimal work flow around the aircraft for repairs and maintenance.

A KC-135 Stratotanker, like the ones designed to be housed in the hangar at Tinker Air Force Base near Oklahoma City, Oklahoma tips the scales at a gross weight of 297,000 pounds. Its engines alone weigh in at 13,750 pounds. And there are four of them.

Dispersed over only ten wheels, this means these incredible aircraft are putting enormous amounts of pressure on the concrete surface of an aircraft hangar. It’s vitally important that design specifications account for prolonged exposure to such pressures.

Designing for wheel placement, parking loads and entry/exit paths must all be planned for in the design of the hangar layout.

This one holds true regardless of the size of the aircraft a hangar will house. Whether it’s the propeller on a small prop plane or the turbine on a Pratt & Whitney turbojet engine, aircraft of all types sizes have components which hang low relative to the fuselage. Bottoming out would undoubtedly prove to be costly. Wing mounted engines are especially vulnerable to any variations in grade.

In your office, workshop or home, you likely wouldn’t think twice about walking to a wall and plugging in a tool or appliance in order to get to work. But in an aircraft hanger, you could be looking at a vast expanse between you and the nearest wall. And a network of extension cords crisscrossing the floor is likely to create more problems than it solves, considering all the aircraft and personnel frequently traversing the hangar. Outlets connected to rafters and scaffolding or banks of them concentrated on islands situated throughout the floor plan may be necessary.

But any electrical solution must also take into account the movement of aircraft through the hangar. If not properly planned, outlet banks have the potential to cause issues with the movement and placement of aircraft. They can even become hazardous themselves. Electrical requirements necessitate careful planning when it comes to aircraft hangar design. 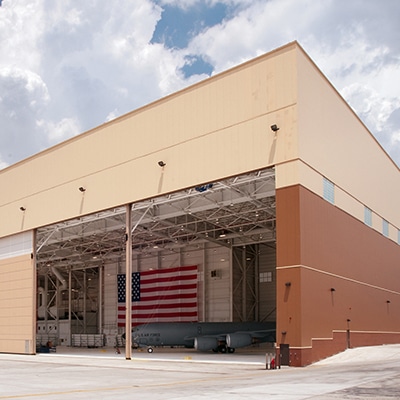