In the first part of this two-part series, we went back in time to [1992] to tell how Project Executive Vice President Mike Tubbs wrote the company’s due diligence playbook.

That fact-finding mission in South Dakota led to our being awarded a U.S. Postal Service distribution center project in the town of Huron — home of The Dakota Inn and the world’s largest pheasant. Read about it here.

Below, read about the detective work Dennis Calvert used to win a Walgreen’s distribution center in Pennsylvania — the second in a series of early Walgreens projects that solidified The Korte Company as one of their key construction partners.

These early jobs laid the foundation for a construction relationship that ultimately produced 87 projects across the U.S. 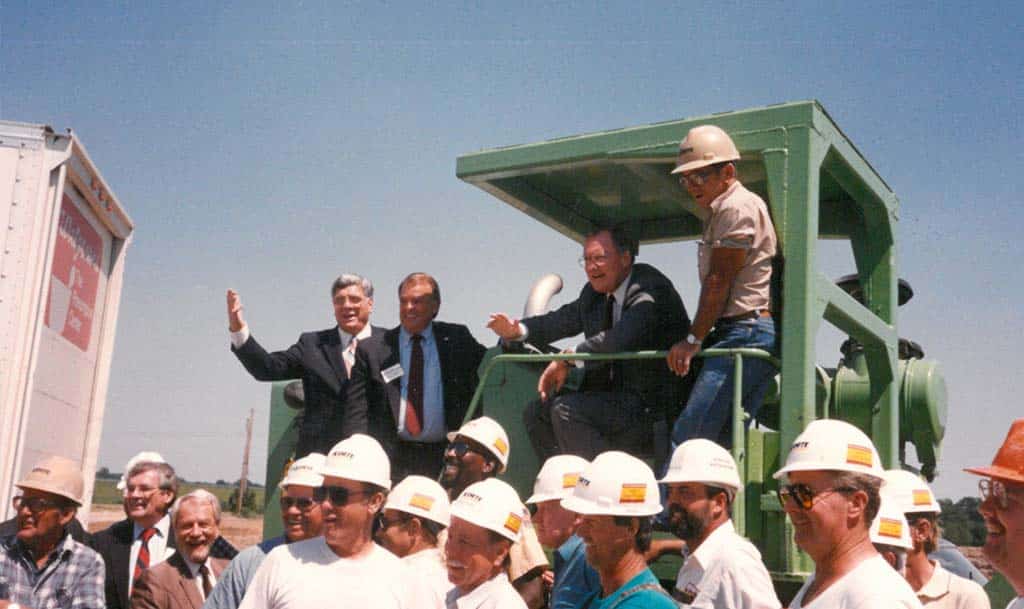 When a company of Walgreens’ size is in growth mode, it’s a good bet that where there’s one construction project, there’s more where that came from.

And in 1990, Walgreens was growing rapidly.

At the time, we were wrapping up our first-ever Walgreens project, the Mt. Vernon Walgreens distribution center. But we’d heard through the grapevine that the company planned to build another such facility in or near Allentown, Pennsylvania.

One strikes when the iron is hot, and it was clear even before the Mt. Vernon work had concluded that the project would be a smashing success. Dennis, who once had been an architect but by 1987 had transitioned into to a Senior Vice President role, prodded his Walgreens contact for more information.

“He said, ‘You guys did a great job for us in Mount Vernon, it was wonderful. But Allentown is a whole other world. It’s full of townships and local lists and unless you’ve got knowledge of how all this works — we can’t use you out there. Thank you, but no thank you.’”

Dennis could have asked Ralph what the next move should be, but he knew what Ralph would say.

Dennis pressed on. So did Bill Pistrui, who at the time was our president of Architectural and Interior Services — or AIS, Inc.

Bill had heard a rumor: Walgreens might be building at a place called “Lehigh Valley Park.” Might.

Dennis did go to Ralph, but it was only to tell him the next move. It was time for a trip. 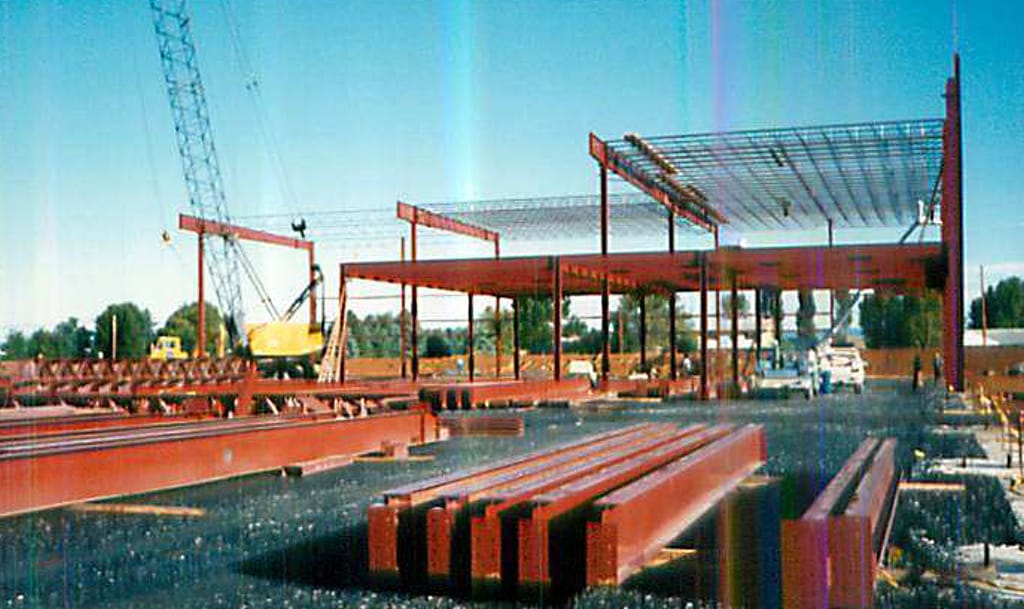 Dennis arrived at the so-called Lehigh Valley Park in the late ’90s with an immediate problem.

“I went to the park and it was full, completely full,” he said. You couldn’t have built a garden shed there, let alone a 335,700-square-foot distribution center.

“So I started asking around to subcontractors,” Dennis said. “They said, ‘Oh, there’s lots of Lehigh Valley Parks.’ So I go to park two, park three, park four.”

Finally, on the fifth try, he found a different Lehigh Valley Park that looked like it had enough room for someone to build a distribution center.

But how to go about confirming this was the site where Walgreens would build? Dennis had an idea.

“They had an office in the park, and I went in to see the manager,” he said. “I said, ‘I’m an architect representing a major corporation and we’re looking for a 50-acre site. Got anything that fits?’”

“We have a space that we could make fit,” the manager said. “Right now, it’s got a road running through it.”

Dennis and the manager spoke a moment longer, but then a secretary stepped in. Someone important had called to speak with the manager. He excused himself from the conference room where he and Dennis were talking to take the call in his adjoining office.

Minutes later, Dennis learned that this particular piece of land was sold to Walgreens. A case of being in the right place at the right time.

Immediately, Dennis initiated conversations with subcontractors and architects to learn which local or regional contractors might be “big enough” to handle a project of this size.

One local architect took it up a notch, telling Dennis everything they knew about who was bidding on the work.

In all, the trip consisted of a week driving around in a rental car and making lots of phone calls. And it wasn’t the first time we’ve had to poke around for some due diligence on location. Just ask Mike Tubbs.

“It’s just like doing detective work,” Dennis said of the road trip. “It was a lot of fun.” 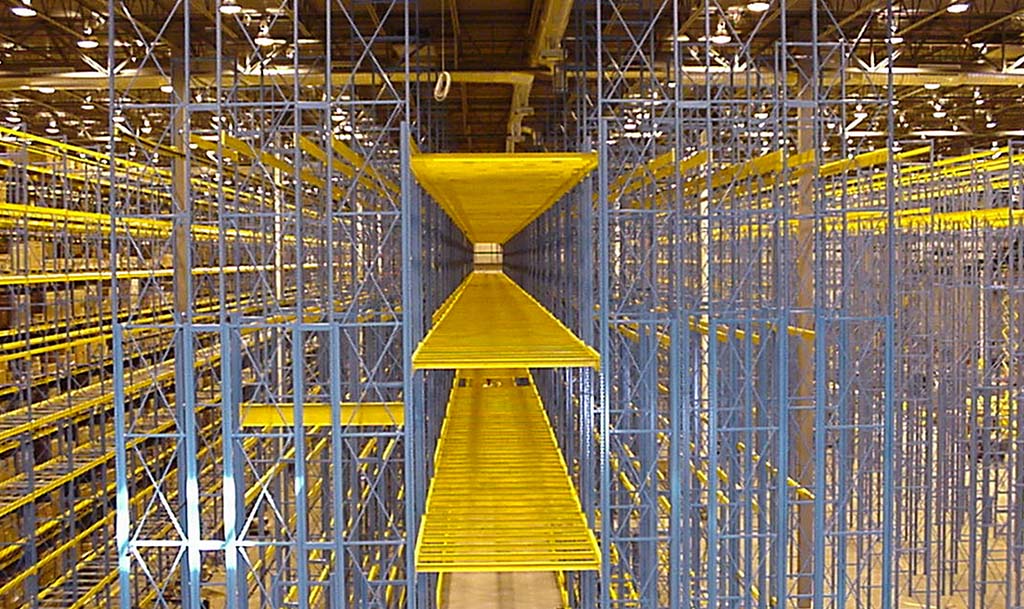 Staying in the know wins the job

Back home in Highland, Dennis kept in touch with the subs around Allentown — and with the brass at Walgreens, too.

Walgreens was insistent: The Korte Company would not be building for them at Lehigh Valley. The builder would be someone local.

We’ll leave their name out, but that someone ended up being the only local contractor capable of managing a job that size — and they knew it. Hoping a lack of serious competition would be a chance to score big, the contractor jacked up the price.

It didn’t go over well when Walgreens saw what they were doing. It lost them the job.

But the work didn’t come to us. Not yet anyway.

Walgreens awarded the work to another bidder on their list.

But they were less of a builder and more of a developer, Dennis remembers. And his frequent phone calls to local subcontractors had revealed troubling information: Not all was well with this replacement. Subcontractors on other projects routinely complained that they weren’t paid for their work.

Dennis let Walgreens know every time he heard about something that could jeopardize their project.

Then there was more bad news. Site preparation in Allentown ground to a halt not long after it began. Crews had encountered a handful of sinkholes and no one knew how to fill them in.

“This went on and on. Then I got a call one Thursday from Walgreens,” Dennis said. “They said, ‘Can you be in our office at 10 a.m. tomorrow? We’ve been checking on everything you’ve told us about this company and a lot of it has proven true.’”

Dennis was puzzled over what Walgreens might propose in the meeting. Maybe they’d ask The Korte Company to work alongside the chosen builder or look over their shoulder as construction manager.

But before the meeting began, the phone rang. Dennis heard every word of this call, too.

It was the current contractor’s main point of contact, the number two in the company.

“He told Walgreens that his company was in serious financial trouble,” Dennis said. “He said, ‘I am leaving the company and won’t be involved on your project. I thought you should know.’”

The Walgreens brass made their decision on the spot.

No working side by side. No looking over shoulders. No more delays. The job was ours alone.

One of them turned to Dennis.

“Can you start Monday?” 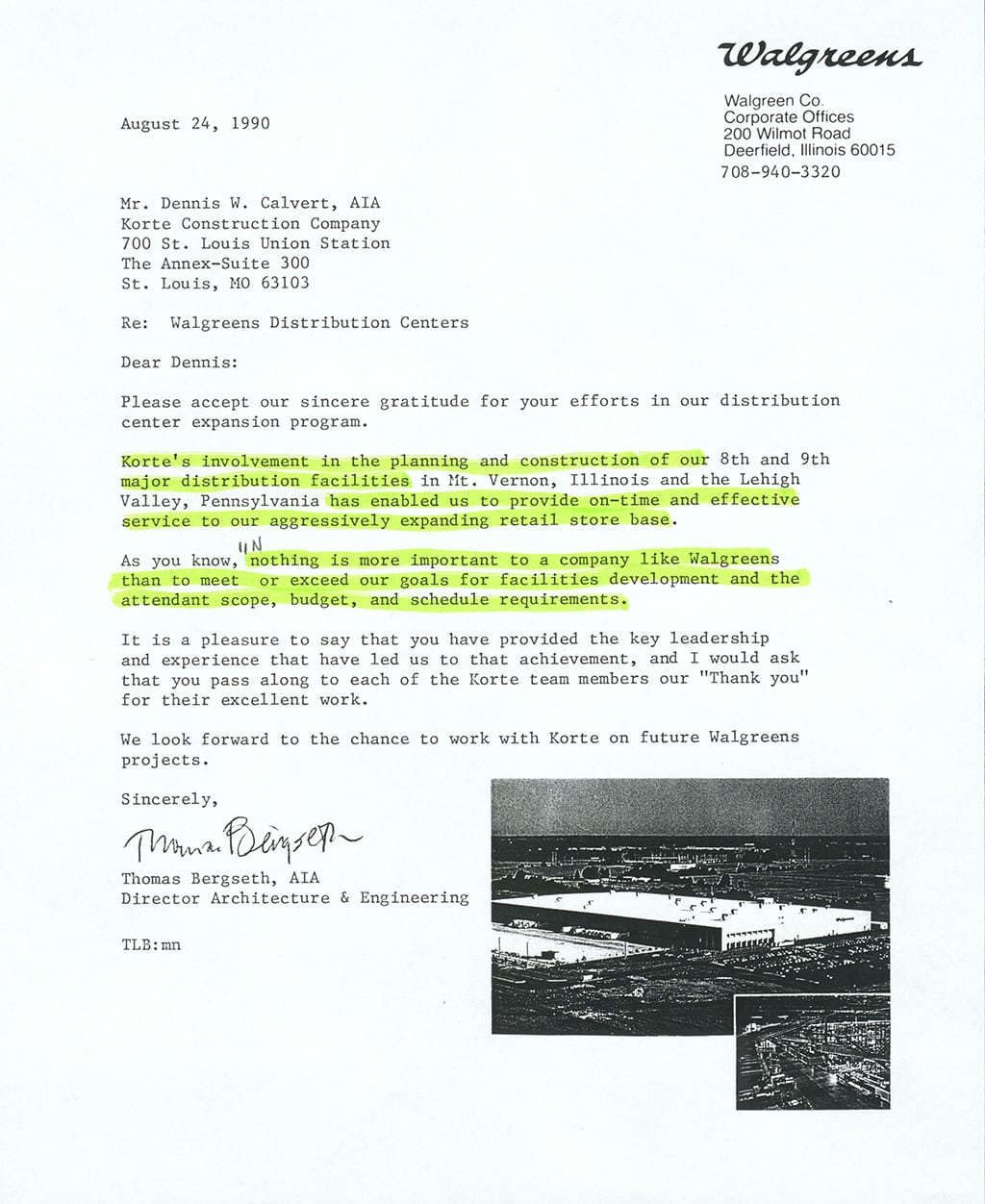