There was a time when education didn’t matter much; when you could live a nice life on little more than good sense and a decent work ethic and when finishing farm chores was a lot more important than finishing high school.

Ask Ralph Korte, our founder. He knows all about that. He lived it.

But a few things happened early in his life that changed his mind, spurred his hunger to learn and put his fledgling construction company on the path toward the success it enjoys today.

The dairy farm and the U.S. Army

Ralph was a farm kid—the ninth in a brood of 14—whose mom and dad ran a dairy operation in southwestern Illinois somewhere between the tiny towns of Pocahontas and Pierron.

It was a different time. In the 1930s, schools didn’t run buses. Truancy officers didn’t prowl in search of kids playing hooky. Electricity didn’t reach the Korte family farm until Ralph was 9 or 10.

Ralph didn’t even go to high school, let alone finish it. By age 19, he had bigger plans anyway. He’d always had a knack for building and spent that summer of 1954 masterminding a new milking parlor setup for the farm. Because his brothers had other plans, Ralph was in line to run the farm when the time came.

One thing stood in his way: A two-year deployment to Korea.

That’s when he first got the bug to learn. Prior to shipping out, Ralph saw a notice for GED tests on a base library billboard. He signed up to take a test. He passed in the 87th percentile despite never having stepped into a high school classroom. 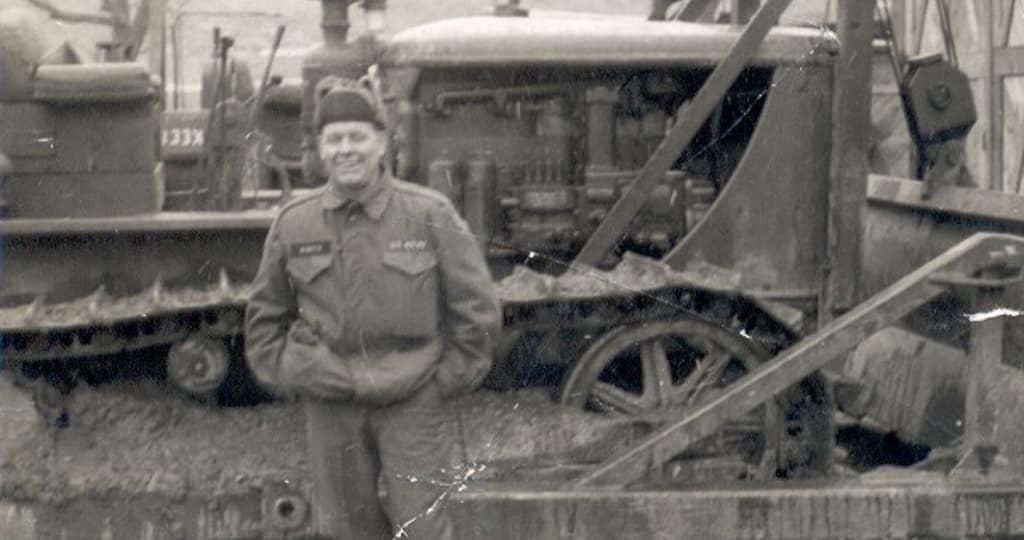 Later, in the tent that passed for a library at his artillery outpost within spitting distance of the Korean DMZ, Ralph met a law school grad who was looking for soldiers to take a Business Law 101 course. Ralph wasn’t particularly interested in business law, but his comrade needed six men to sign up for the course before the Army would pay him to teach it.

Again, Ralph signed up. He recalls the impact that course had: “It changed my life.”

The hunger to learn comes home

Back in the states, Ralph’s dad, who was 63, had some news. The rules had changed. He’d have to wait to turn 65 before he could retire and collect Social Security. It meant Ralph had to wait another two years before he could take control of the farm.

Rather than wait, he chose to turn his knack for building things into a business. The Korte Company was formally founded in 1958.

It wasn’t long before Ralph was looking for more classes to take. He was eager to take advantage of the G.I. Bill. Having missed an application deadline for courses at Southern Illinois University-Edwardsville (SIUE), he instead enrolled at a local community college thanks to the help of a friendly Veterans Affairs administrator. It was a move that ensured Ralph could take advantage of the G.I. Bill and formally begin his pursuit of higher education.

“My only motivation at that time was to square up with Uncle Sam,” Ralph recalls. “It turns out, those classes helped me run my business.”

In the spring of 1960, Ralph enrolled at SIUE, taking two classes two nights a week. During that period, The Korte Company completed its first Design-Build construction project, a long-term living facility in Highland, Illinois. The company has been a leading healthcare builder ever since.

Finally, in June of 1968, Ralph graduated with a bachelor’s degree in business. And his company had gained some serious momentum thanks to another opportunity that proved to be a watershed moment in the company’s history. Thanks to his formal education, Ralph was prepared.

It’s the story of two strangers’ secret visit to St. Louis and a savvy local builder who happened to own the right piece of land. To read the story of how The Korte Company built a Wall Street Journal printing press in Highland, click here.

Print editions of the Journal rolled off the presses starting in April 1967. “That was a big success for us,” Ralph recalls. “It changed the character of the company.”

Ralph has long been known for his entrepreneurial spirit and an acute ability to see opportunities others might miss. In the mid-1970s, he joined a group of local business leaders, university administrators and teaching staff to establish SIUE’s Construction Management Program.

At the time, no formal curriculum existed that combined the business, architecture and engineering skills graduates would need to succeed in a multi-faceted construction role. Turns out, the program Ralph helped create was one of the country’s first. And it’s become among its best, topping lists in terms of quality of education and graduate placement rates.

Ralph didn’t stop at the creation of the new curriculum. A few years later, as he stood in line for ride at a Florida theme park with his grandkids, he mulled over a conversation he’d had with an SIUE administrator. The University hoped to jumpstart expansion plans, including boosting its business programs. The administrator had asked Ralph if he would consider donating seed money.

Ralph wanted to think about it.

So he’s standing in line, warm under the Florida sun, when he notices a man in front of him wearing a peculiar shirt. The words were written plainly below the shoulders.

“Whoever dies with the most toys still dies.”

Ralph didn’t need to think anymore. “Why not try to help?” he recalls.

When he got back home, he cut a $1 million check to SIUE’s School of Business. Over the years, he and his wife, Donna, have led fundraising efforts for various on-campus improvements. In addition, The Korte Company established an endowed scholarship for construction management students in Ralph’s name.

So why did Ralph do it?

Remember, when he was growing up, things were different. Schools didn’t run buses. Electricity hadn’t reached that part of the Illinois countryside until the WWII years. Farm work came before school work every time.

He did it because he knew—maybe better than most—that getting an education isn’t easy. But it’s worth it.

And he wanted to help. That’s why.