Some people never forget a face.

“When clients call in, I know who they are. They don’t have to identify themselves.”

From the way someone speaks to quirks of past projects (more on that later), Colleen’s brain stores information like a file cabinet. This talent has played a quiet but critical role in the success of The Korte Company’s Las Vegas division for the past 20 years.

As an executive assistant, her core responsibilities are to Greg Korte and Mike Vaccari. But her memory bank for all things Korte has made her a go-to across the entire company.

“Everybody in the Midwest, their point of contact is me. I do things for the accounting department, IT, HR, preconstruction, marketing.”

In a coincidence that’s almost too good to be true, Colleen’s phone extension is 711. CFO Susan  Bowman once called it the company’s 7-Eleven line for convenient one-stop shopping.

“When she said that to me, I nearly fell off my chair. But then I thought, ‘Okay, you’re right. If it’s Las Vegas, call Colleen because I can tell you what’s going on.’” 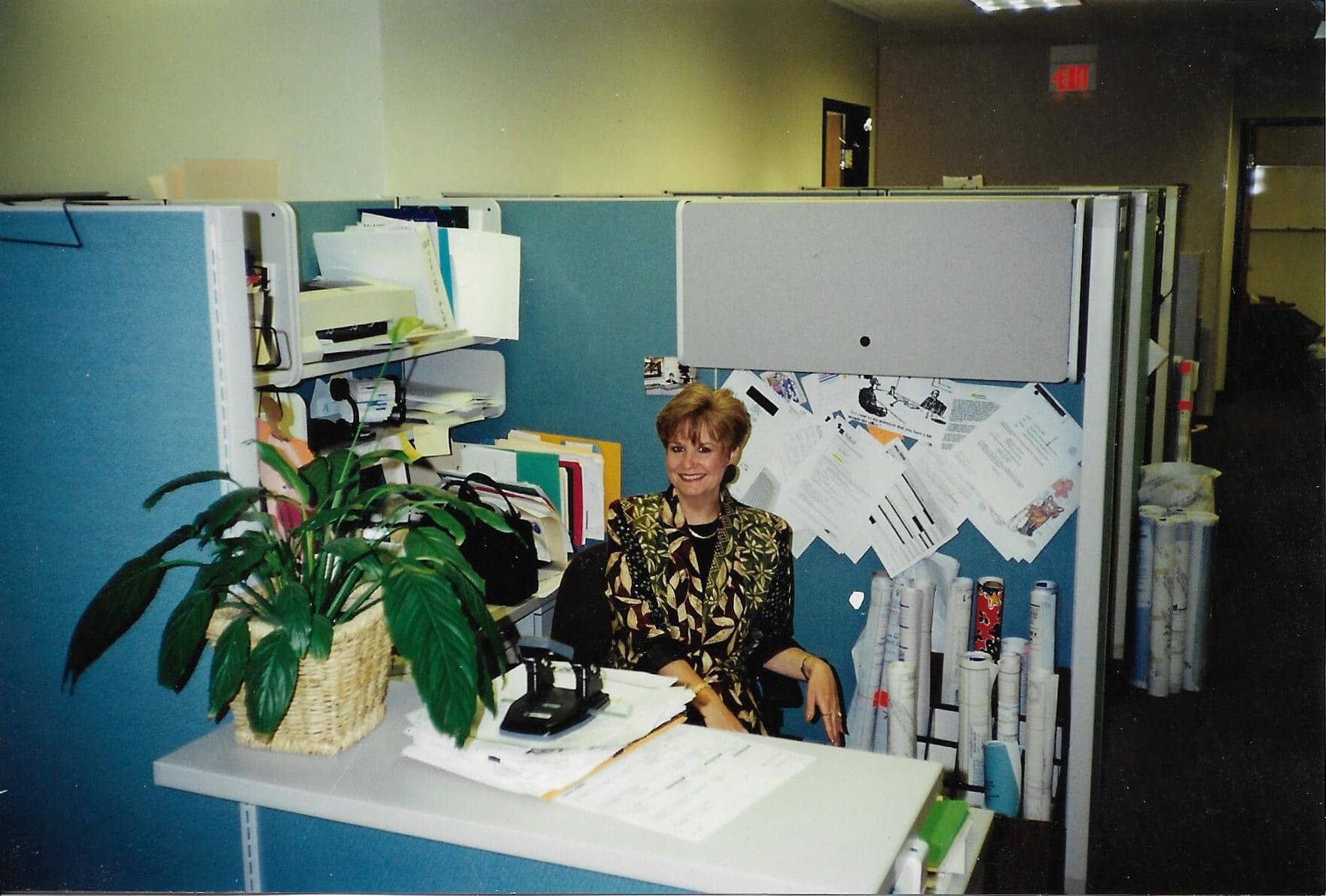 When Colleen picked up her first administrative job with a CPA in Los Angeles over 30 years ago, her mother told her to buy the Gregg Manual to brush up on her secretarial skills.

But Colleen bristles at the term ‘secretary’ today.

And sure, she still speaks with clients and organizes paperwork. But her responsibilities involve so much more than the job title suggests. If you walk by her desk on any given day, you’ll see a mountain of documents from field employees. She calls it a “dumping ground,” one with few breadcrumbs hinting at the paperwork’s source or why it’s on her desk.

That’s no small feat, and it’s just one of the many seemingly small responsibilities Colleen takes on to help the entire company be more productive and effective every single day.

That’s what a lifetime of specialization in the administrative trenches gets you. Her deep institutional memory benefits both colleagues and clients. Earlier this year, she fielded a phone call from someone who recently purchased a building that The Korte Company had built 17 years ago.

“They needed the plans for the project, which had since been renamed. At first, it wasn’t ringing a bell. At Korte, we called it what it was at the time we were building it. But then I remembered it, went into the old files and sent them the information. That kind of thing happens with being here as long as I have. And if I can’t think of something, I’ll call Greg and say, ‘Do you remember such-and-such?’ and we’ll start brainstorming. And then, boom! It comes to us.” 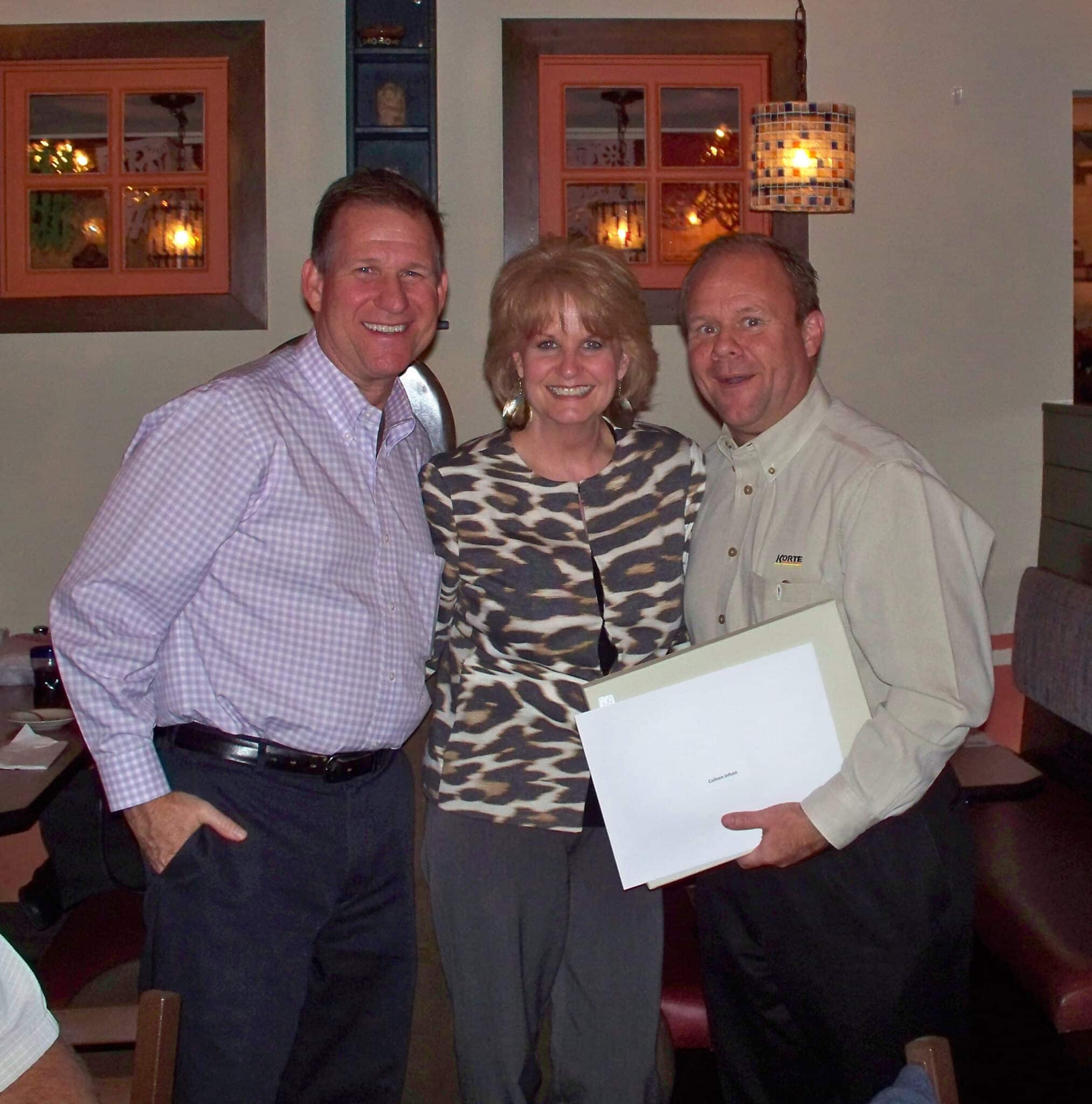 Boom and bust and boom again

Las Vegas has remade itself over and over, and Colleen has watched these boom-and-bust cycles her entire life.

“I came to Vegas as a kid on road trips. We would come through town and go down to the strip. It’s changed so much. It really has.”

She grew up in California’s San Fernando Valley, then spent a few years as a makeup artist before transitioning to office work. One day, she bumped into a handsome stranger named Joe in the hallway of her building. Aside from his “devastatingly handsome” good looks, what she remembers most was his outfit.

“He was wearing blue jeans with a sport coat. And at the time, that was something you didn’t do.”

And that was something Colleen liked. 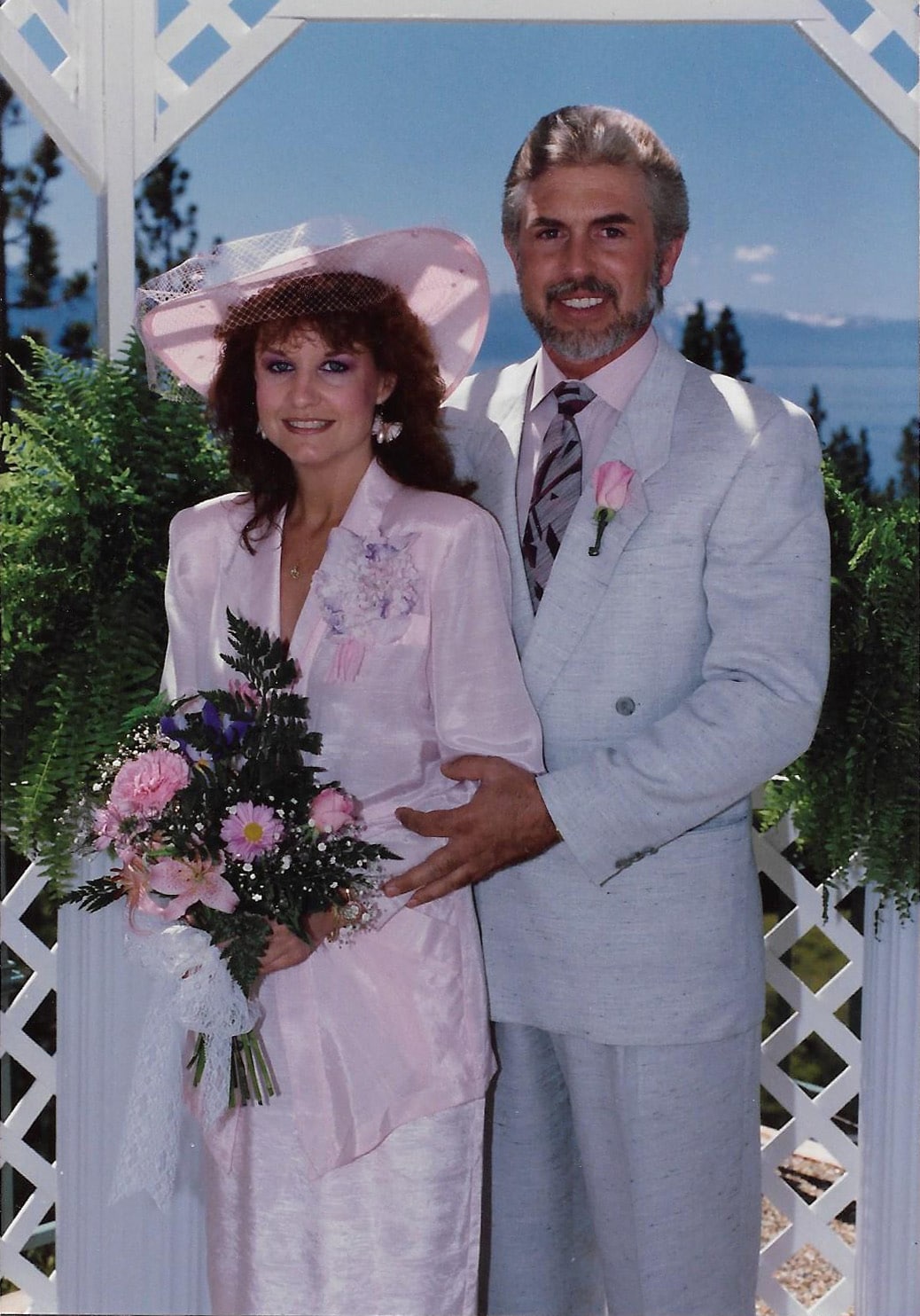 A few years after marrying, Joe got a job working as an investigator for Steve Wynn and they relocated to Las Vegas. By then, Colleen wasn’t just a wife, but the mother to a preschooler and three teenage stepsons.

To bring in extra cash, she worked for Hallmark, stuffing card racks at grocery stores. In 1998, a friend told her about an opening at a company called Korte-Bellew.

A day after her interview with Greg Korte, she got hired as a receptionist and within a matter of months, became the executive assistant. The rest is history.

Colleen watched as Korte-Bellew merged into The Korte Company in 2002, spurring growth and change across the city. Several notable projects included Corporate Center V, Aliante Home Finding Center and St. John Neuman Parish Center. In 2009, the Great Recession hit. It was a rough time for The Korte Company, and it took a toll on Colleen, too.

“I visited the cardiologist because I was having chest pains. It was just stress. It was tough. A lot of companies went out of business.”

Colleen held onto her job, but a lot of long-time colleagues didn’t. It hurt to see. And while everyone knew the downturn was temporary, recovery still took longer than expected.

But The Korte Company survived and even hired many of those employees back. Now, business is better than ever. And while Colleen is happy to celebrate the company’s construction achievements across the city, it’s the people she cares about most. After all, supporting and serving them is at the heart of her mission and how she approaches the job.

Colleen still has the Gregg Manual her mother told her to buy all those years ago. In fact, it’s still on her desk. But when it comes to her long tenure for The Korte Company, she wrote the book on doing it right all on her own. 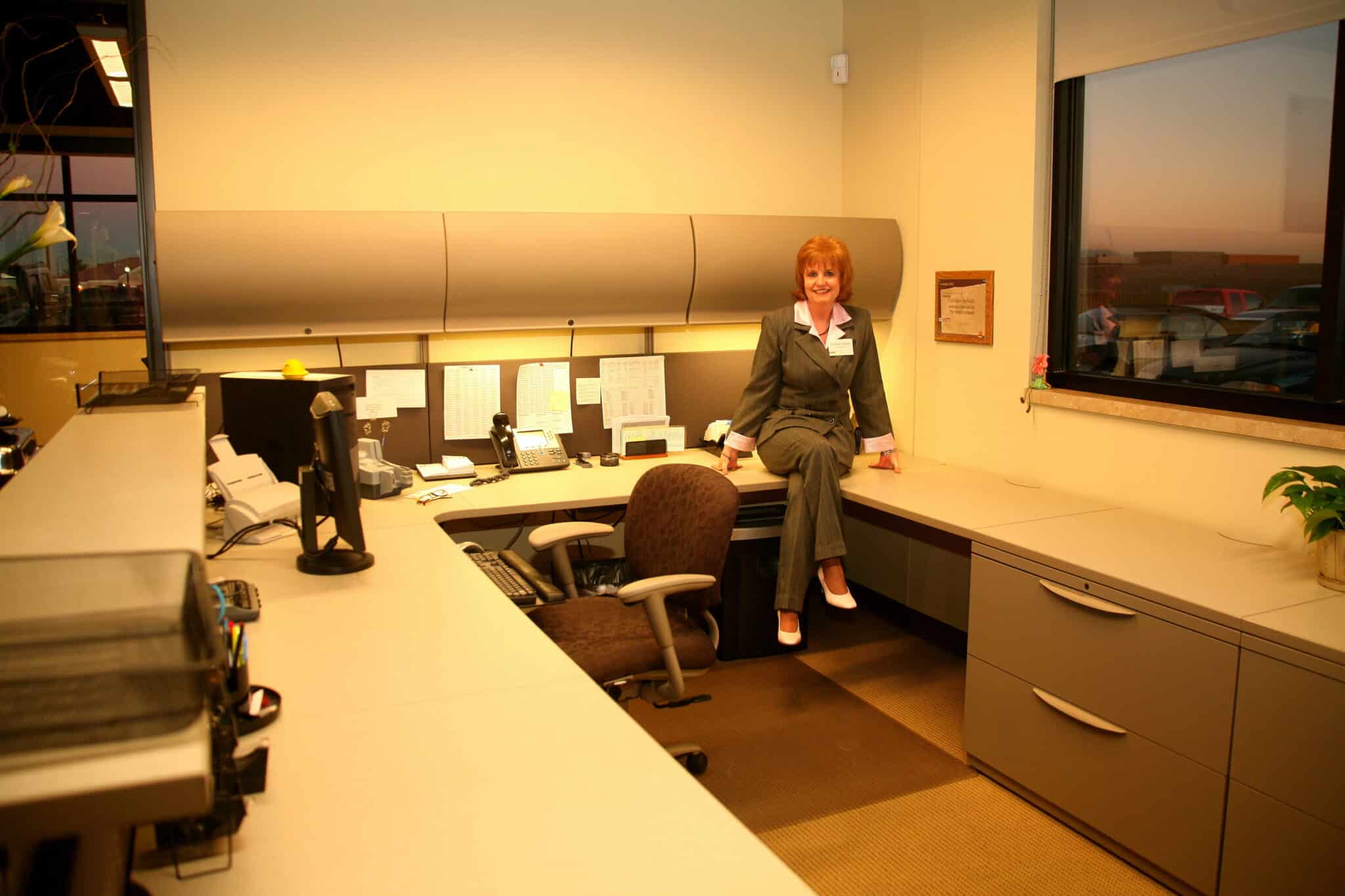 Outside of work, Colleen’s life revolves around her husband, four children and eight grandchildren. Most still live in California, but that’s not far from home these days.

“No family gathering is small, and we have these big family events. I had over 20 people in my tiny little house on Christmas — we just cram in! I love spending time with them. Spending time with your grown children is incredible, it really is. And the fact that they want to spend time with me? Even better. I just love seeing who they’ve become.” 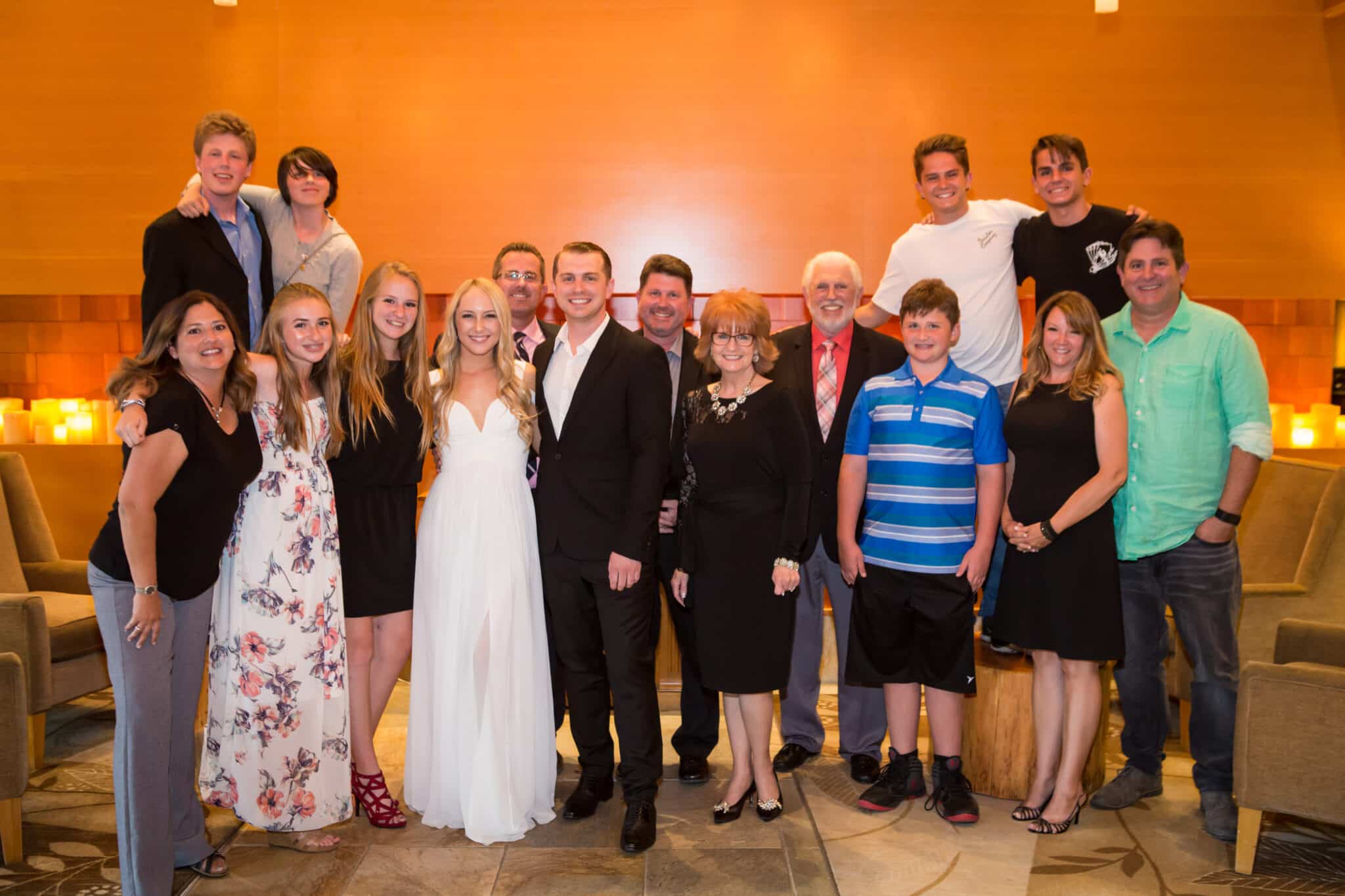 Family matters to Colleen more than anything. And sharing that core value with The Korte Company is what’s kept that connection so strong over the years.

“We build fantastic projects, but we care about our employees and are a family-owned company. We aren’t one of those contractors that just builds and then steamrolls over their employees. That’s one of the reasons that Korte is so great to work for.”

In her spare time, Colleen loves scrapbooking. She first picked it up to cure her empty nest blues after her kids left for college. Today, she dedicates an entire room in her house to the hobby. Before the pandemic, she even shared the pastime at work, hosting frequent scrapbooking nights with colleagues. In so many ways, they’re like family, too.

That’s why thinking about retirement is so difficult for her to imagine.

“I’d like to think that I’m indispensable. Of course, that’s not the case, but I’m very loyal and I really look out for the company. And I am the mom of the office. There’s no doubt about that.”

When she drives to work each day, she can hardly recognize the city of her childhood vacations. But when she sees what The Korte Company has built, she feels nothing but pride. There’s the Precision Surgery Center and the Chamber of Commerce. The Nevada Joint Training Facility and the newly renovated El Cortez hotel.

And even though she never swung a hammer, she knows the value of her contributions over the years. She sees herself in all those buildings, too.

“It makes me feel really, really good. Really proud. I had my hand in it, you know?”